The future is bright, if we rebuff divisive people -John Mahama 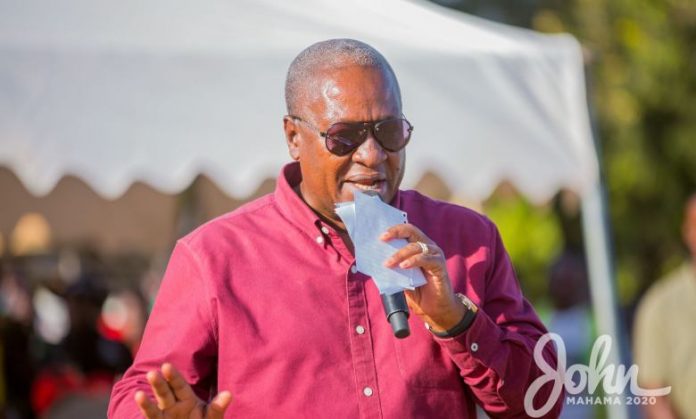 Former President, John Dramani Mahama has explained to the Ghanaian people that the future of the country’s economy will be bright if collective efforts are made to rebuff those who seek to divide the country for their gains.

Mr Mahama who spoke at the Kempinski Hotel in Accra on his Ghana at a crossroads lecture noted “The future is bright if we rebuff those who seek to divide us for their gain, and if we open the opportunities of our country to all our citizens irrespective of ethnicity, political affiliation, age or gender.”

According to him, “Thirty years have passed since President Jerry John Rawlings of blessed memory, appended his signature to the newly drafted Constitution of 1992, which made an irrevocable commitment to a return to democratic rule and constitutional governance. In the period preceding that moment, which set in motion what has turned out to be the most stable and enduring period of governance in our history, we have plunged from the heights of the Black Star of Africa. From the lofty ambitions of the post-independence era to the depths of economic catastrophe, institutional decay, corruption, and despondency. Our life as a nation had been checkered with multiple governance experiments alternating between civilian and military administrations. The several starts and stops led to a situation where, by the 1980s, our circumstance seemed intractable.”

Touching on the economy, Mr Mahama said the NPP government performed abysmally as the economy was in complete shamble and growing negatively before the wake of the coronavirus pandemic and Russia-Ukraine war.

“There appeared no way out of the stranglehold of poverty and despair, and we teetered on the brink of national collapse. After a decade of stabilization by the then PNDC regime, which involved confronting and overcoming such problems as economic recession, hyperinflation, prolonged droughts, devastating bush fires, shortage of basic commodities among other serious socio-economic problems, it became clear enough, that the broad masses of the Ghanaian people yearned for a return to democratic governance. Thus, began the process to fulfil their genuine aspirations through a participatory and inclusive approach. The product of that process, the 1992 constitution, ushered in the fourth republic and set us apart from our peers in the sub-region as having, perhaps, the most advanced democracy in West Africa and one of the very best in Africa.”