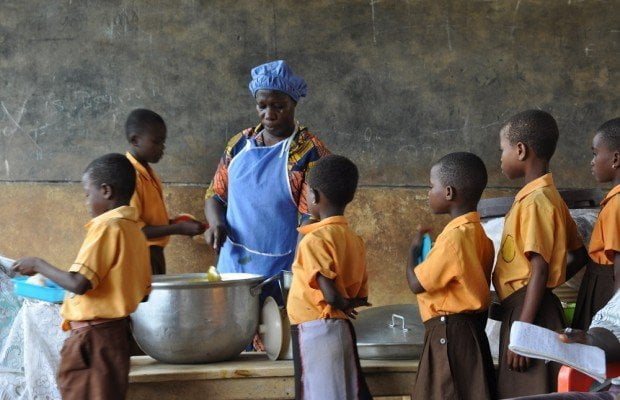 13-year-old Hannah Zong is one of the several pupils in the basic schools in the Bolgatanga Municipality of the Upper East Region who, since the resumption of school, has not tasted the afternoon meals that she used to eat during the previous school terms.
Like the anchor of the ship, Hannah says the meal used to keep her and her peers going during the afternoon lesson period after she has spent her Ghc 1.50p ‘chop money’ her parents give her.

Hannah says when they resumed school this term, none of the caterers came to school to start cooking their favourite meals.

The students along with the teachers thought that it was because the school had just re-opened. Now, they have been hit with the rude realization that they may go without afternoon meals for a while.

The caterers have gone on strike due to the government’s inability to pay arrears owed them. They are also asking the government to increase the feeding per pupil which currently is pegged at 0.97p to Ghc3.

When A1 Radio’s Kennedy Zongbil visited Hannah’s school; Bolgatanga Experimental Primary School to observe whether the caterers were available,  he met an empty kitchen; one that has not tasted any flames for a long time.

Upon interacting with the pupils of the schools, they eventually realized that they may not have hot meals for quite some time. With a look of surprise and shock, like that feeling of disappointment, they stood innocently looking and wondering what to say and how to survive the rest of the days, weeks and maybe months without their meals.

The situation persisted not only in Hannah’s school. At the Kalbeo Tindonsonbeligo Basic School, the Ayusiyine Basic School and Aningazanga Primary and JHS, the situation was no different.

The caterers per our sources, wrote to the government sometime during the last academic calendar, asking the government to pay their arrears but as nothing was done in that regard, they issued a directive to members to not report to work until government settles their allowance and increase the feeding per each pupil.

The Ghana School feeding programme since its inception in 2004 has been faced with several challenges raising questions around its implementation.