We’ll picket at Jubilee House to demand 9 months arrears, they can kill us if they want – Frustrated NABCo trainees speak 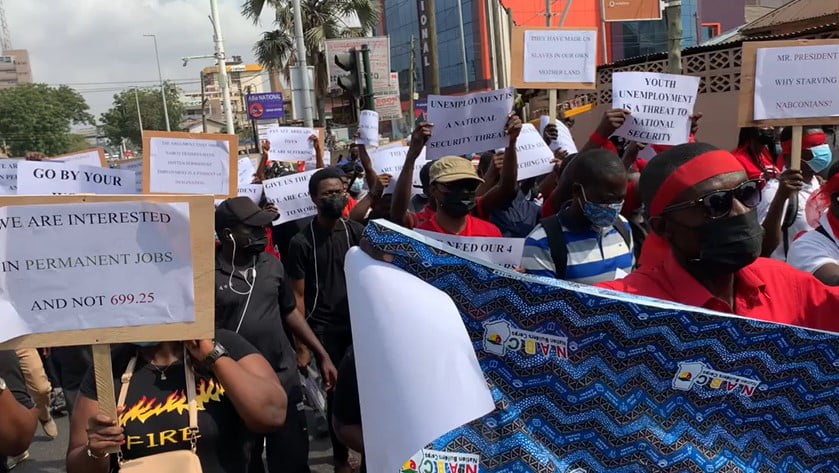 “We told the Greater Accra Regional Police Commander that when we picket at the Jubilee House, that is when they [the government] would hear our cry but they insisted that they would hear our cry even if we go to the Independence Square. With this, we would have a strong reason why we would not go back to the Independence Square. I do not think that there is any law that would prevent us from picketing at the Jubilee House peacefully. Peacefully is the word,” Dennis Opoku Asiedu, President the Nabco Trainee Association of Ghana (NABTAG) said when he spoke on A1 Radio’s Day Break Upper East Show today.

His comments were on the back of a recent release by the Association.

Following the demonstration on 18 August 2022 in Accra, members of the Nabco Trainees Association of Ghana have given the President, NanaAkufo-Addo, and relevant stakeholders a week’s ultimatum to respond to their grievance.

They said if the president fails to respond, before 26th August 2022, they will picket at the Jubilee House to show their frustrations.

Mr. Asiedu insisted the picketing at the Jubilee Houses was non-negotiable because “we are not going there with guns, neither are we going there with any offensive weapon. We are going there peacefully to do our peaceful picketing. We will go there even if they are supposed to kill us because we are even dying in our various homes.”

These critical steps, according to Mr. Asiedu, have to be taken now before the programme ends in September later this year as stated by the Finance Minister.