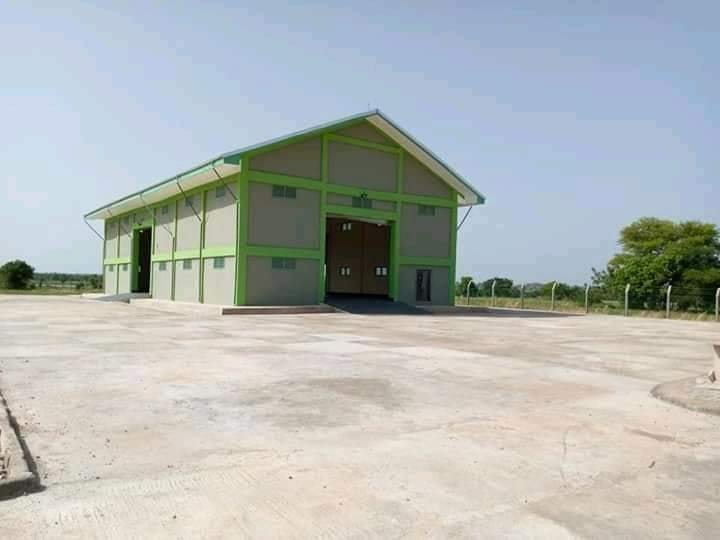 President Nana Addo Dankwa Akufo-Addo, in October 2017, rolled out the government’s one-district, one-warehouse programme with a ground-breaking ceremony for work to begin on the first warehouse project in Ejura in the Ashanti Region.

The warehouse project is a component of the government’s Infrastructure for Poverty Eradication Programme (IPEP).

The policy was to construct warehouses in the 216 districts to handle produce and store the anticipated surpluses under the government’s Planting for Food and Jobs initiative.

The construction of the warehouses in all districts was to help minimise post-harvest losses but also improve the marketing of agricultural produce.

In collaboration with Officials of the former Ministry of Special Development Initiative (MSDI), MoFA organised a ceremony on Monday 7th June 2021, at 10am, at the Ministry’s Research Center to mark the commencement of the warehouse takeover process to put the warehouses constructed, to the purpose for which they were intended.

In the Upper East Region, 6 of the warehouses have been constructed. They’re in Talensi, Bongo, Builsa South, Kassena-Nankana West, Garu and Nabdam Districts. This was according to the Upper East Regional Minister, Stephen Yakubu. He said this when he took his turn at the Ministry of Information’s State of the Region Report at the MOI’s Press Centre.

These warehouses, according to an Agriculture Policy Consultant if properly used, could have been used to help manage food systems and control food prices and availability.

It would be recalled that the Ministry of Food and Agriculture (MOFA) has set up food retail centres in the Greater Accra Region to mitigate the hike in food prices.

Mr. Wullingdool blamed the implementation of the PFJ along with its integration with the One District One Warehouse system as a more permanent way of dealing with the rising food costs.

“They have a policy of One District One warehouse. If that had worked to expectation, those warehouses could have at the moment stored whatever was produced and in times like these, when demand is high and prices are escalating, those in the warehouse can be offloaded to address the rising prices.”

“If they reach this point where the Ministry itself has to take up the role of selling the product directly to consumers, I think that it is a bit of a challenge,” he said.