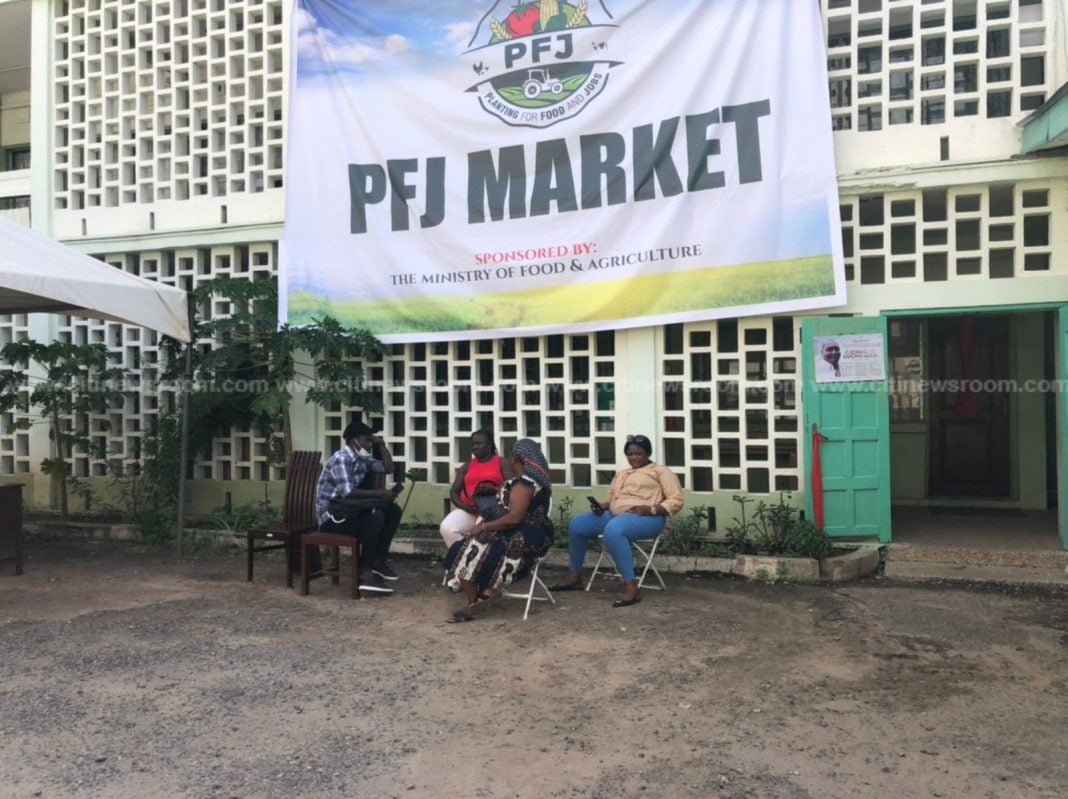 The Minister of Food and Agriculture, Dr. Owusu Afriyie Akoto said this when he spoke on URA Radio this morning, Wednesday, December 7, 2022, as part of his working visit to the region.

About 3 weeks ago, the Ministry of Food and Agriculture (MOFA) set up food retail centres in the Greater Accra Region to mitigate the hike in food prices.

Touting the success of the programme, the Minister said, the PFJ markets show that there’s indeed an abundance of food in the hinterlands. He spoke on URA Radio as part of a working visit to the Upper East Region.

“The supply situation is solid and it goes against the pricing situation in the urban centres. You may have heard that 3 weeks ago, I intervened directly by organising for food to be collected from producing areas into Accra for one-third the price that these women are charging on the markets in Accra and Kumasi.”

“That shows you that if I am able to take a bunch of plantain from the Western North Region, Sefwi Wiawso and bring it to my offices in Accra and sell it with the same transport cost and everything and be able to sell it at one-third the price that is existing in Makola, Agbogbloshie and other markets, you should know there’s something fundamentally wrong with the whole trading arrangement,” he said.

The success of the interim programme, according to the Minister, shows that, “there’s food in the hinterlands and somebody is making huge supernormal profits, taking advantage of the inflationary situation of this country. We shouldn’t allow that. I have demonstrated that really, there’s availability of food.”

The successes could be replicated in the Upper East Region if the conditions are right.

“It is the sceptics who are talking about sustainability. You watch me, I mean, the future would tell. Into the future, you watch it. Those who are sceptical about the thing are only talking about sustainability when the thing has not even started. This is just the pilot, when we start the real thing, you would hear of us. We are rolling it out. Now Kuamsi has started. Takoradi would start soon, Koforidua would also start and so on. Cape Coast is going to start. I am going to Tamale later on today, I would discuss with my directorate to see the possibility of bringing the same thing to Tamale if the difference in price between the producing areas is significant. I mean Bolga, you tell me and I would come and do it for you.”

“[For the Upper East Region], we have now got the figure, we are looking into it. If we find out that the prices in Bolga are outrageous, like in Accra compared to the producing areas, yes, we would be too glad to open up here,” he said.