The Upper East Regional Football Association has announced 30th December, 2022, as the day for Ordinary Congress.

The Congress will witness representatives from the various leagues which consists of Division Two League clubs, Women Division One League clubs, Juvenile Leagues and the Division Three leagues clubs.

The 2022/2023 football season in the Upper East Region is scheduled to kick off in the early weeks of January.

Below are the schedules 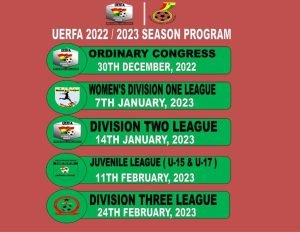