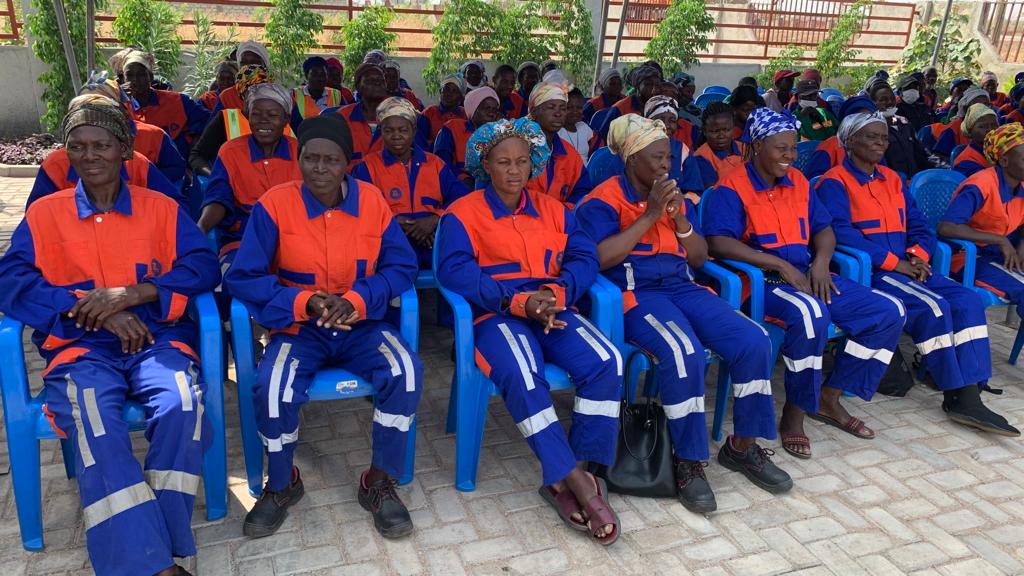 Their responsibility includes sweeping major cities, and roads as well as desilt choked gutters on a daily basis. As a result, they wake up as early as 5 am daily before the sun sets in to tidy the streets that were previously littered by road users.

The sweepers are not only exposed to diseases such as cholera, diarrhoea, and typhoid, due to the filthy environment they work in, they risk being knocked down by vehicles and motorbikes.

For their benefit, the road sweepers who are working directly under the supervision of Zoomlion Ghana Limited, a waste company are paid a paltry amount of Ghc180. 00 each month which is equivalent to 13.86 United States dollars.

The despicably small amount of Ghc180. 00 paid monthly to the sweepers falls below the current National Daily Minimum Wage of Ghc 13.53. The paltry amount is woefully insufficient to support their families under the current economic hardship of the country.

Sadly, the allowances for the vulnerable sweepers who were recruited by the government’s Youth Employment Agency (YEA) which delays have made life difficult, especially under the current economic challenges.

Stay away from the media

When their allowances are delayed, the sweepers always look for available platforms to air their grievances for the government to honour its part of the contract. One such platform includes the media. However, they have been warned to desist from making public their grievances through the media.

“I want to reiterate; the radio will not help us. To all of you sitting here, try as much as possible, no matter how it is, you talk to your leaders but you don’t take the matter to the radio to [be] discuss there. It is not good for us”, Samuel Amangedam Atiru warned.

Mr. Atiru who is the Upper East Regional Director of the Youth Employment Agency wants the road sweepers in the region who have not been paid for the past 9 months to exhaust all communication channels before seeking help from the media anytime their allowances are delayed.

Mr. Atiru gave this cautionary advice when he addressed the disgruntled workers of Zoomlion Ghana Limited during an end-of-year thanksgiving service held at Pusu-Nanmongo in the Talensi district of the Upper East Region.

Samuel Amangedam Atiru who was the NPP Upper East Regional Deputy Youth Organizer until he was appointed as the regional YEA director while speaking exclusively to A1 Radio’s Joshua Asaah said he suspects the beneficiaries’ cry for delayed allowance to be paid is always instigated by some opponents of the NPP party.

“I am a politician and I know where these issues may be coming from. The Regional Director of the Youth Employment Agency will not have 100 percent of beneficiaries be NPP members. I don’t discriminate when it comes to the employment of beneficiaries. I am 100 percent that the calls for allowances to be paid are always influenced by our opponents looking at how the messages are coming.”

The state institution, YEA engages the services of Zoomlion Ghana Limited, a subsidiary of the Jospong Group of Companies by recruiting the workers and paying their allowances through Zoomlion Ghana Limited. The leading waste management company in the country, on its part of the contract, equips the sweepers with protective clothes and tools to sweep major streets and desilt-choked gutters.

“The pay is not up to what you are doing but with God, everything will be ok. You leave [your homes] very early to make sure that you clean the streets. We are very impressed. We are praying that next year, things will change and it will be better for all of us”, Mr. Atiru added.

The YEA boss admitted that the delayed allowances for the beneficiaries have lost its value due to the persistent increase in prices of goods and services in the country.

While calling on the sweepers to have patients with the government anytime the allowances are not forthcoming, Mr. Atiru expressed optimism that payment of the delayed allowances for the sweepers in the Upper East Region would begin effective Monday, 12th December. He called on the public to respect the sweepers as they go about their daily activities to keep the environment clean.