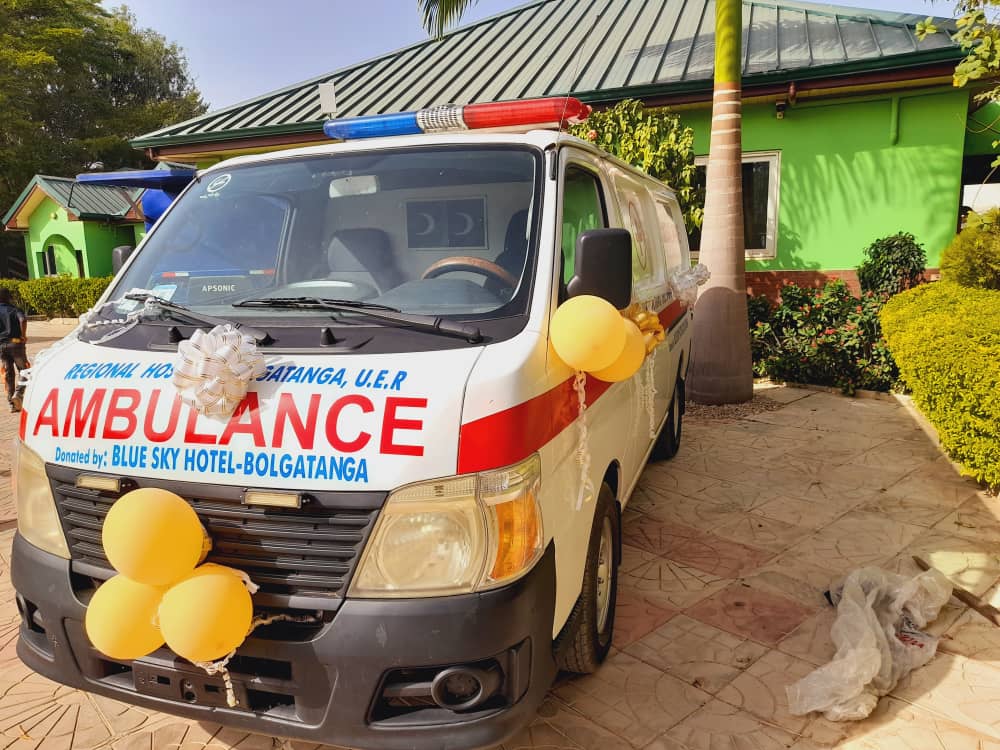 Blue Sky Hotel together with its owner, COP Patrick Akogo, has donated an ambulance to the Upper East Region Regional hospital in Bolgatanga to enhance health delivery.

The donation, according to COP Patrick Akolgo, was necessary because of the lack of resources to equip the hospital to properly provide proper health care for residents of the region.

Presenting the keys of the fully equipped ambulance to authorities of the regional hospital, the CEO of Blue Sky Hotel expressed optimism that the hospital will be well-positioned to transport patients during emergencies. 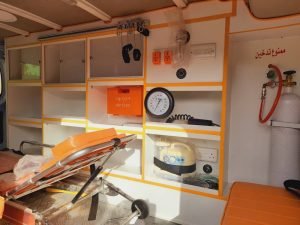 “I have observed that the regional hospital hasn’t got any ambulance apart from what the Ghana Ambulance Service provides. So, sometimes, there are road crashes, and other accidents and the demand for the only ambulance within the constituency is so much. And they can simply not serve the purpose for which they were brought. So, the management of Blue Sky Hotel and the owner feel that as part of our Corporate Social responsibility, we should come to the aid of the regional hospital”, he stated.

COP Patrick Akolgo while acknowledging the efforts of the government at providing social amenities, admonished the public, especially the corporate body, to contribute their quota to better the lives of citizens. 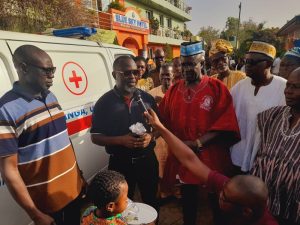 The Administrator in charge of Health Services at the Upper East Regional Hospital, Elias Mort who received the gesture, on behalf of management, thanked COP Patrick Akolgo and the Blue Sky Hotel for the intention to save lives.

With the ongoing rehabilitation of the hospital which Mr. Mort said is expected to complete in the first quarter of 2023, he said the ambulance donated has come at the right time to serve the emergency services of the hospital.

“We don’t have a stationed ambulance in the hospital. Currently, we rely on the national ambulance services and you don’t expect that they will achieve 100 percent of the emergency needs that we deal with all the time. So, this ambulance is going to deal with the response time and it is something that we have been grappling with all the time”

On his part, the Member of Parliament for the Bolgatanga East Constituency, Dr. Dominic Ayine entreated corporate organisations in the Upper East Region to emulate the gesture done by COP Patrick Akolgo and the Blue Sky Hotel.

“We know that it is the responsibility of government to provide health services but we know that government has very little resources. I am sure that all of you are aware of the economic and financial constraints government is going through currently. So, businesses as part of their corporate social responsibilities should emulate the same”, Dr. Ayine added.

The hotel and its owner also as part of their corporate social responsibility organised a party and an estimated number of 2,000 kids from the Bolgatanga East District and beyond attended.

Among the attendants included the DCE for the area, David Amoah, party executives from both NDC and NPP, opinion leaders from the district, Vandals of the University of Ghana, and Old Students of Bawku Senior High School.