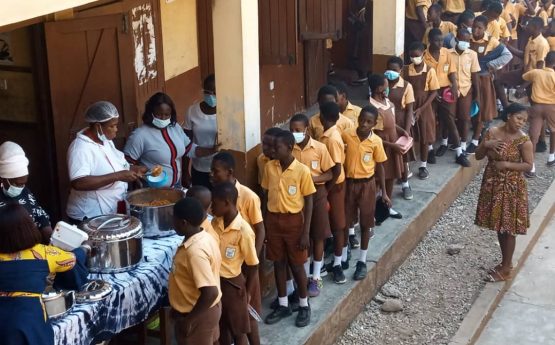 The conversation surrounding the school feeding programme appears not to be ending soon. Some parents in the Bolgatanga Municipality of the Upper East Region have called on the government to as a matter of urgency pay caterers the allowance owed them.

When the arrears are paid, it would enable them to cook for their wards to help them concentrate in school.

According to the parents, since the introduction of the school feeding programme, most children are motivated to go to school knowing that they would be fed.

Speaking to A1 Radio’s Kennedy Zongbil, the displeased parents bemoaned that, some children now feel reluctant to go to school because food is no longer served during the lunch breaks.

They called on the government to pay attention to the caterers and pay them their allowance.

A parent, Nmah Assibi, stated, “my firstborn during her time in school used to wake up early and go to school because she knew that, she would get food. Now, what is the situation? My last told me the other time that they no longer cook for them, so I should increase his chop money. Those days he did not even ask for chop money, but now he does. So, the government should try and pay the caterers so it helps us take care of our children”.

Another parent who is a mother of three Elizabeth Azigsizien, believes that “it will affect them very badly because when they don’t eat, how do they learn? So, it will affect their academic performance. We are just pleading with them; they should go back I hope by all means the government will hear them and settle them well”.

“…what the government is owing, it should pay them so that the children will go back to school. Because when they are going to school, they have the hope that, they will get food and eat and that is what motivates them to sit down and learn. Without the food, most of the children would be absenting themselves from school,” Madam Marcelina, a parent also said.

Caterers have laid down their tools in a response to the government’s not paying their allowances and are also not increasing the amount per feeding per child.