Inflation goes up again: a looming food crises in the Upper West Region?

Mr. Wullingdool took to his Facebook page to express his frustration at the situation.

“For the 4th time, the Upper West Region of Ghana is leading in Ghana’s unacceptably high food inflation which currently stands at 35.4 percent. Does it suggest a looming food crisis in the region? It needs to be noted that Ghana’s food inflation is self-inflicted owing to years of overreliance on foreign food to supplement domestic production.”
“And even when we did the production under the PFJ we rather boasted of exporting as we had no means of storage. For the upper West Region, in particular, it has over 80 percent of the population being into farming. Ironically the region has cereals as the 3rd driver of food inflation. This is unacceptably high.”
“The current price hikes in fertilizer and other farm inputs could further deepen the problem. Government will have to as a matter of urgency institute some measures to not only increase production but store the produce. Government also has to help investors who are interested in fish production to do so in the region. Failure could lead to serious food insecurity in the Region.” 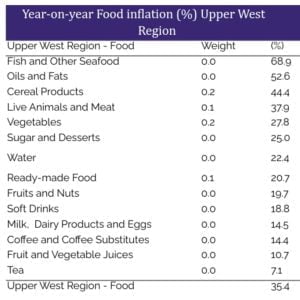 Ghana’s inflation rate jumped to the highest level in more than 18 years in May as food and transport costs surged.

Annual inflation accelerated to 27.6%, the fastest pace since January 2004, from 23.6% in April, Government Statistician Samuel Kobina Annim told reporters Wednesday in Accra, the capital. The headline inflation rate is more than double the upper ceiling of the central bank’s target band of 6% to 10% and has been above that range for nine months. Prices jumped 4.1% in the month.