Despite several appeals by farmers in Sakoti, a community in the Nabdam District of the Upper East Region to the Lands and Natural Resources Minister, Samuel John Jinapor to assist in finding a lasting solution to the issue of destruction of farms by elephants, the farmers are yet to receive any positive feedback.

Each year, farmers numbering up to 300 usually lose their crops to elephants and other wild animals due to the lack of Field Rangers to assist in controlling or herding the animals away from the farms. 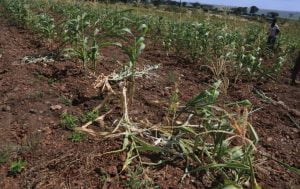 As the planting season approaches, Moses Apiah, a reporter with A1 Radio visited some of the farmers. They said they have lost hope in the government.

According to them, the Minister has failed to even listen to their concerns.

A farmer said “this year, I’ll plant but will make sure any wildlife that attacks my crops if I can shoot and kill, I will do that. I can’t starve myself to farm and elephants will come and eat them all. Last year, I could not harvest a penny.”

“I worry that we have never been consoled ever since we started crying over this problem. Imagine using your all to farm and elephants will come and destroy them, how will you feel. Authorities need to look at how to protect us from these yearly occurrences,” another farmer noted.

The Member of Parliament for the area, Dr Mark Kurt Nawaanem touching on the issue, said it was an insult to the integrity and efforts of Ghanaian farmers. He explained that the inactions by the Minister and MP for Damango in the Savannah Region should warrant either impeachment or vacation of post in Parliament.

According to him, on numerous occasions in Parliament, he [Dr Nawaane] had raised questions regarding the situation.

“In his answer, the minister lied that there were field rangers on the ground in Sakoti to assist farmers to keep the elephants at bay. But my checks, which I pointed out to the Minister, revealed that there are no field rangers in Nabdam. The farmers have been requesting such staff to lead them in their fight against the elephant’s invasion.”

“The consequences of the Minister’s continuing to lie before Parliament is impeachment or vacation of post. We hope the Minister will take the necessary steps to provide the field Rangers as a correction of the above aberration.”

He added that the situation needs an urgent response as farmers were approaching the planting season.

Meanwhile, the Upper East Regional Manager of the Wildlife Division, Binlinla Joseph noted that efforts were made to sensitize farmers on the handling of these animals.

He added that his outfit has made available four Field Rangers to the Nabdam District to assist farmers when the need arises.