The Islamic funeral rites, known as ‘Adua’ for the late Bolgatanga Central Constituency Chairman of the New Patriotic Party (NPP), Alhaji Alhassan Abdul-Raham Amaliba was held over the weekend in Bolgatanga Municipality of the Upper East Region.

The immediate past NPP Chairman who was known and called Alhaji Sinkansi passed on in the early hours of Friday, June 17th, 2022 in Bolgatanga at age 56.

He was a native of Sherigu, a community in the Bolgatanga Municipality. He was extremely instrumental in youth activities in Bolgatanga and that earned him the name Sarikin Samaruka Zongo which translates to mean Youth Chief.

Bolgatanga Constituency Secretary of the NPP, Richard Abagna who read a tribute on behalf of the party said the late Chairman was a pillar to the party in the constituency.

“As a party, we first met this great man in 2002 when he led a group of young men and women called One Touch No Second Round, he was a leader of the group in the constituency. The contribution of this group led by him could not be over-emphasized. We therefore as a party want to state with so much pain that we have lost a pillar.”

The tribute recalled how Chairman Alhassan after the New Patriotic Party lost the 2008 elections to the N.D.C. worked tirelessly for the party by forming and leading another powerful youth group in the constituency called Dazota. 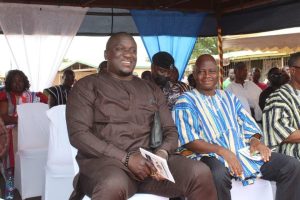 “As a leader of the group, he galvanized a lot of support through his leadership skills from opposition to power in 2016. Additionally, chairman Sankasi did not leave the scenes, he took a step forward and contested the 2013 constituency elections of which he won as first Vice Chairman for four (4) years, and won again in 2018 as Chairman. Chairman Sankasi why so soon?”

“This is the period we needed you most, you were an asset for our great party the N.P.P in the constituency. We can only remember you well by such periods in our struggles that when we were confronted with difficult situations, you stepped in at all times, be it monetary, advice, strategy’ e.t.c. We know that you have done your part on earth but God our creator loves you most and therefore fellow patriots and all gathered here today, nature has once again taken from us yet another pillar but who are we to question our maker.”

Tribute from the family which was read by Alhaji Iddi Amaliba described Chairman Alhassan as a generous, and problem solver who committed his resources to the welfare of the family. 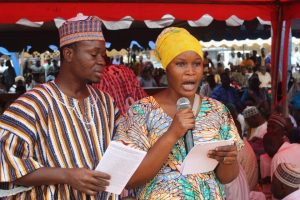 “According to our mother, hardly will young Alhassan eat his meal alone without his friends, however small it was. The late Upper East Regional Chief Imam his eminence, imam Umar, perhaps noticing this leadership character in him once told big bro that he is a prince that will eventually lead his people to greatness. Perhaps, this is what materialized when he decided to join polities despite being a man of few words. He would always tell us that life is all about compassion not only to the family but to humanity as a whole whenever we complain about him not spending more time with the family. This has made his name Alhassan Sankasi, a household name in Bolga.” 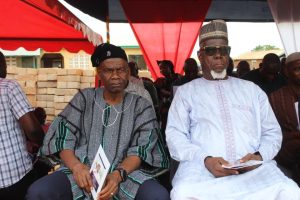