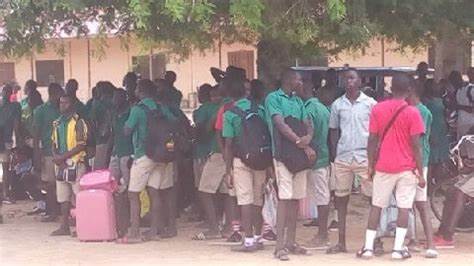 Some parents have expressed dismay over a purported directive by authorities at the Kongo Senior High School in the Nabdam District that each student should pay cash of GHc429.00.

The said amount, according to the parents was demanded to be paid within August before their wards will be allowed to sit for the 2022 West African Senior School Certificate Examination.

According to them, they were told that their wards had destroyed some school properties and also broke a car glass that is said to belong to one of the teachers. According to the parents, their major worry is that despite claims of destruction, the management of the school has been unable to show exactly where the supposed damaged properties are.

It could be recalled that the final year students of the school on June 5, 2022, during their ‘’Nenos’’ night celebration asked their juniors to lie on the floor as well dance inappropriately as a way of welcoming them to the school.

But the celebration later broke into a fight and as a result, all the final year students were suspended for almost a month. Some of them were called back with a directive that each parent should pay a fine of GHc429.00 as fees for the damaged properties. Students were supposedly asked to sign a bond of good behaviour involving their parents.

But some of the aggrieved parents said the explanations given to them by the authorities did not warrant the said fine as they (authorities) exaggerated the incident.

A parent said “I would not have a problem paying if the teachers were able to show me the damage caused to the school or the supposed teacher car that they said our children have destroyed. I asked them to show me any proof of destruction but they refused. Where is the truth in it? Yes, we understand that our children didn’t behave well but you don’t capitalize on that to make money from us.”

“What even worries me is the fact that they are saying our children will not take their final exams if they don’t pay the GHc429.00. This is an indication that it is money that they want. I suggested to them to either reduce or better still allow the students to take the exam after which they (students) will pay later but they (authorities) refused to listen. They said my idea doesn’t make sense”, another parent said.

But the headmistress and some of the school teachers when approached by our reporter regarding the said amount and demand, declined to comment, and rather asked the reporter to seek assistance from the Upper East Regional Education Director, Mr. Edward Azure.

They added that the said amount came as a result of a committee that was established to find out the cost of damage. Recommendations of the said committee included the imposition of a Ghc429.00 fine.

But Mr. Azure, when contacted by our reporter, explained that after the findings by the committee, a letter was written to the Director General of Education. The response to same is still pending.

He, however, emphasized that without feedback from the Director General, no student should either be asked or tasked to pay.