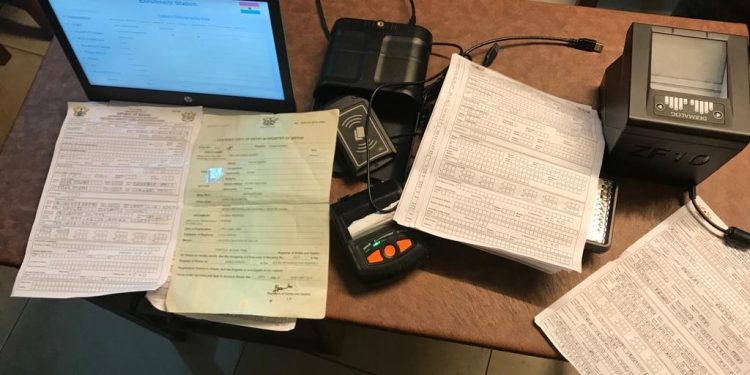 When our reporter, Kennedy Zongbil visited the Ghana Revenue Authority in Bolgatanga which houses the Bolga Municipal Registration Unit of the National Identification Authority (NIA), he reported that the registrants were generally in a pensive mood and were absolutely disappointed with the processes leading up to the registration.

Some of the registrants took the time to speak on the Day Break Upper East Show on A1 Radio.

“I have not only been here, I started following the registration process 3 months now. That was in Bongo. I work at Bongo-Soe. I went there in April, they told me that they always do bookings so I should come in May. I went there in May and they said the number that they required they wanted per day has been reached so I should return there 22nd June. I went there in 22nd June and they told me that [I should return] 19th [July]; that was yesterday. In Bongo, the number there is too much so I decided to come here [Bolgatanga Municipal Registration Office located within the premises of the Ghana Revenue Authority],” one of the registrants lamented.

“I came here on Monday and there have been a lot of people. I have been unable to do it. I think we need more officials,” another registrant explained.

Some others who spoke earlier, on the same platform, did not share different sentiments.

Master Oluman Blacksmith said, “the Ghana card is very important for us. I was listening to the interview with the boss [Regional Registration Officer] I want him to come out and say the truth. He said that about 18,000 cards are in the office. I want him to be honest to the people of the Upper East Region, he should mention one radio station that they went to and made the announcement for people to come for their cards and people didn’t. When you are interviewing them, they should not come and say things that are not true. People are struggling to get their cards. They should be honest.”

Another caller who gave his name as William, calling from Wikongo said “the boss, the one who just finished talking, I beg him in the name of God, he should come out and tell us the truth. Why do we as Ghanaians not want to help our brothers and sisters? I always pass by their office around 4 am and people will be in the queue in that area and they would not even get the card. So why is it that always, our big men are lying to us like that? Why are we like that? They have to think about God first and speak the truth.”

It would however be recalled that in a recent interview on the same platform explained that there has been an increasing demand for the Ghana card within the past few weeks in the Upper East Region because some communities, driven by excessive politics, decided not to be a part of the mass registrations exercise for the card, along with the subsequent mop-up exercise.

A lot of people did not take the opportunity to register in this region. There were too many political talks about it. People bought into it. It affected a lot of them. Now that people are feeling that and seeing the need for the Ghana card, they are now rushing. That is why we have a huge number rushing to our offices.” [See full interview here].