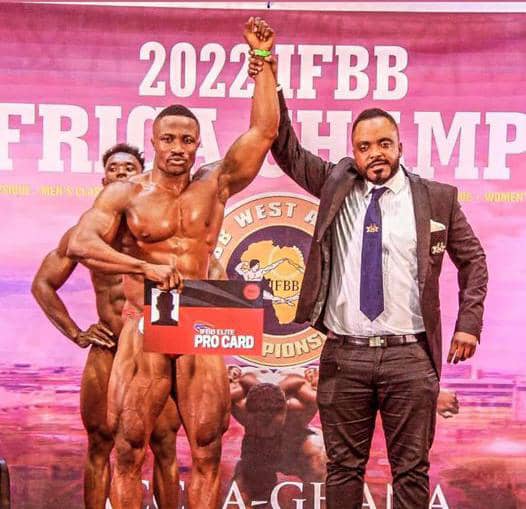 Evans Amwagsi, a Police Officer has won a Gold Medal and the coveted International Federation of Bodybuilding and Fitness (IFBB) Pro-Card License. The international contest which is the first of its kind to be organized in the country was held in Accra.

The contest saw seven (7), other competitors, from other West African countries battling for the enviable Pro-Card License.

Commenting on his achievement in an interview with A1 Radio, Mr. Amwagsi said winning the Pro-License from the reputable international bodybuilder’s association has motivated him to train much more for global competitions.

By winning the IFBB Pro-Card License, he will be getting opportunities to compete on global stages in Brazil, USA, South Africa, France, Germany, Spain and other European countries.

The professional bodybuilder said he was only working out at the gym to stay fit for his job as a Police Officer.

Becoming a bodybuilder wasn’t an initial interest until he was encouraged by some friends to give it a try. This was after he posted pictures of his workout pictures and videos on Instagram adding that he only started bodybuilding in 2020.

Touting his achievements as a bodybuilder, Mr Evans said he placed 1st in the Middle Weight category of the Man Ghana Bodybuilders Contest held in Ghana. He also placed 2nd in the Arnold Classic Championship which was hosted in South Africa. He further acknowledged that training for the sport hasn’t been without challenges but he persevered through till now.

Responding to a question on how he will combine the bodybuilding sport with policing, he said the Ghana Police Service has a sports unit that gives room for sportsmen and women to partake in tournaments. The champion added that he will be granted a sport anytime he would be preparing for a contest.

Commenting on his passion for sports, Evans Amwagsi said he started off in sports by playing for Wiaga United FC in the Builsa North Municipality of the Upper East Region and now Bodybuilding. He advised that though the individual sport was expensive, it is rewarding in the long term.