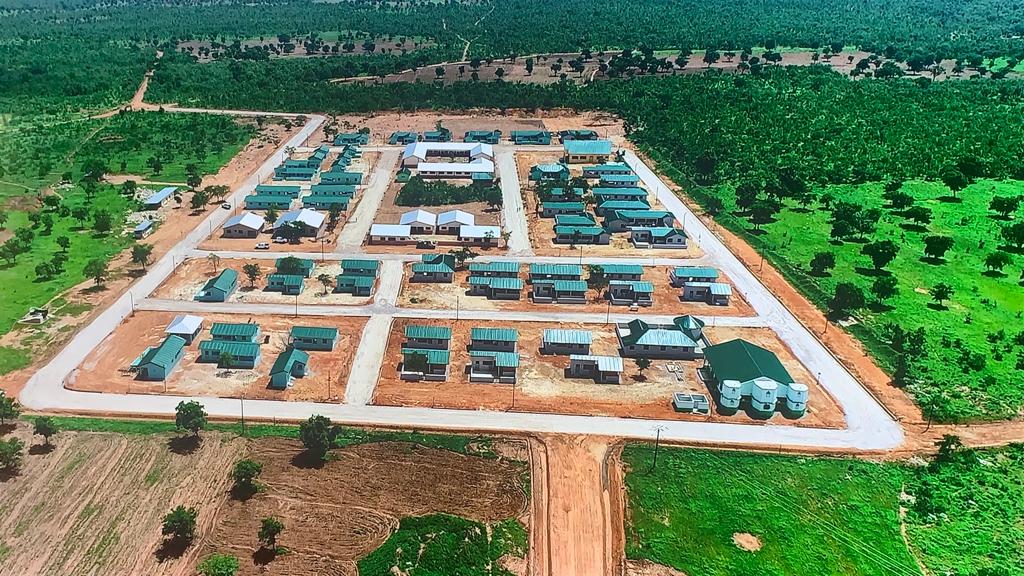 A population of about 1, 000 inhabitants in mining communities in the Talensi District of the Upper East Region are being resettled to pave way for large-scale gold mining.

Cardinal Namdini Mining Limited, a subsidiary of Shandong Gold, a Chinese mining firm that touts itself as being one of the best ten mining companies in the world has provided shelter for the affected inhabitants at its concession.

The resettlement site is located at the operational sites of the company – Accra, and Biung.

Some of the affected residents are natives of communities such as Datuko, Biung, Bapela, Gigaare, Tolaa, and Sheega. Some of the beneficiaries are also migrant miners from different parts of the country.

The facilities provided by Cardinal Namdini Mining Limited at both the Biung and Accra sites include a school, teachers’ quarters, CHPS compound, nurses’ quarters, church, mosque, and library facility.

Aside the concrete residential structures roofed with modern zinc, the twin communities that were initially not connected to the national grid, have access to electricity and potable drinking water.

Emmanuel Kofi Adusei, Community and Social Responsibility Manager of Cardinal Namdini Mining Limited who disclosed this added that some of the affected miners who had occupied the area before his outfit took over the sites, cast doubts about the company’s resettlement package.

“If we were to build the whole thing it would have been a huge community but some people wanted to take their money and go to their hometown. Some didn’t believe that we could do this, they thought we were just joking. It is understandable because they haven’t seen this before. And more so, how could you build a whole community when you are not even mining? So, some of them were doubtful and we entered into negotiation and signed an agreement as to what we are going to provide. Unfortunately, some people thought we were joking so they took their monies and misused the monies.”

The CSR manager for Cardinal Namdini Limited disclosed this while speaking to the Upper East Regional executives of the Ghana Journalists Association (GJA).

“We’ve almost done with the two resettlement projects. Accra site, they’ve moved to their new homes. Biung is done, hoping that by this weekend, they will also move to their new homes so that we will start earthworks towards the construction of our projects”, he added.

Some of the beneficiaries he said, were engaged in illegal gold mining otherwise known as galamsey.

But Mr. Adusei said Cardinal Namdini Mining Limited has a livelihood support programme for the resettled miners so that they will not go back to do what the country’s laws frown upon – galamsey.

“100 of them, from both sites [Accra and Biung] want to go back into farming. So, we gave everybody, cutlasses, hoes, wellington boots, spraying machines, pesticides, fertilizers, maize, beans, and millet and we ploughed the lands for them. Again, for vulnerable households, we are giving them food rations monthly with some monies. We are also providing counselling services and health workers attend to their health needs. We are also providing alternative livelihood support for them which is livestock. After they were resettled, we gave every household Ghc1,000.”

In a month, Mr. Adusei said Cardinal Namdini Mining Limited hopes to support the capacity-building service of some miners in the Talensi district by enrolling them at the Bolgatanga Technical Institute.

After the resettlement process, the construction of the company’s project which comprises offices, camp accommodation, and plants will pave way for actual gold mining, possibly in the next two years.