Joseph Dindiok Kpemka, a former Member of Parliament for the Tempane constituency in the Upper East Region has admonished the government to declare a state of emergency, as soon as practicable in mining areas.

The former Deputy Attorney General in a recent Facebook post hoped that the government would be firmer in its fight against the menace.

He also explained that the reason for the continued interest in illegal mining is greed.

“Greed is the reason why galamsey is destroying our dear country. We have underestimated and under-reported the level of devastation.”

“Those thwarting the efforts of government should bow their heads in shame. I suggest a declaration of State of Emergency in mining communities without further delay,” he wrote. 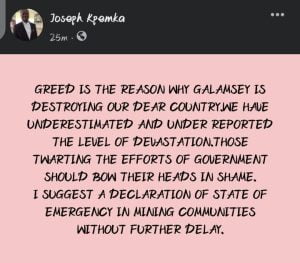