We’re working to win all 15 seats, 85% of presidential votes for NDC in Upper East Region 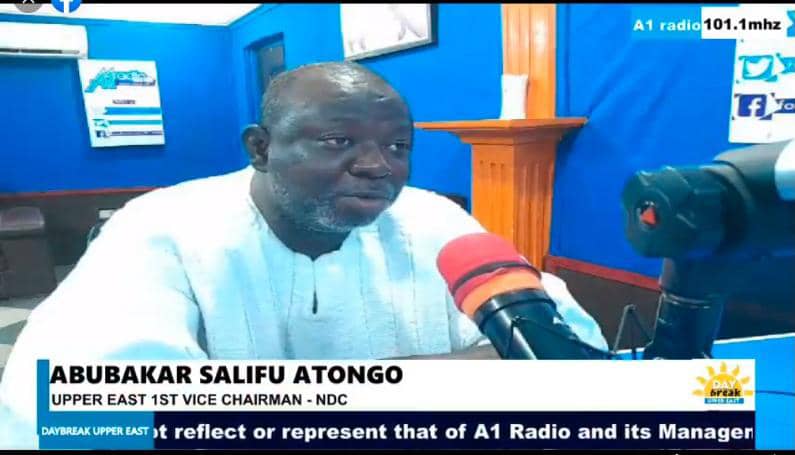 The First Vice Chairman of the NDC in the Upper East Region, Alhaji Abubakar Salifu Atongo is confident that the party can retain all 14 seats currently held by NDC members in the Region and go on to win the Binduri seat.

Abdulai Abanga, is the Member of Parliament for Binduri. He doubles as the Deputy Minister for Works and Housing.

“We have to win all the 15 seats in the Upper East Region. It is very realistic for us to win. I have bee interacting in the constituency that we lost and I can tell you that I got not less than 70 percent from that constituency. That tells me that since I am there, they would listen to me.”

“We are looking at 85 percent. If you take the whole country in terms of vote appreciation, the Upper East is leading,” he said.

Alhaji Salifu Atongo suggested that the President’s request for the people of the Upper East Region to give the NPP at least 7 seats in the 2024 election is ridiculous.

It would be recalled that the Upper East Regional NDC caucus urged the elected executives to be forceful in achieving the set targets.

Speaking at the Regional delegates Congress at the Bolgatanga Technical University, the leader of the caucus and MP for Builsa North, James Agalga reiterated the need for the people who have been elected to competently manage the affairs of the party for the next four years.

The Builsa North MP said, the ultimate goal of the NDC’s internal election is for the new executives, together with the party, to become victorious in the 2024 general election.

Mr. Agalga noted that their caucus is ready to work tirelessly with new executives to retain all 14 seats and take the Binduri seat which is currently occupied by the governing NPP.

“What this exercise is intended to achieve is to select leaders to lead the charge to victory come 2024. Our appeal to you is that, people who would emerge victorious should not jubilate too much, you have to form unity with those who would lose. The message we have for you is that, as for us, the parliamentary caucus, we are ready and we have never relented on our efforts to continue supporting our party. In such a way that, come 2024 we retain all the 14 seats that we won and to recapture the Binduri seat,” he said.