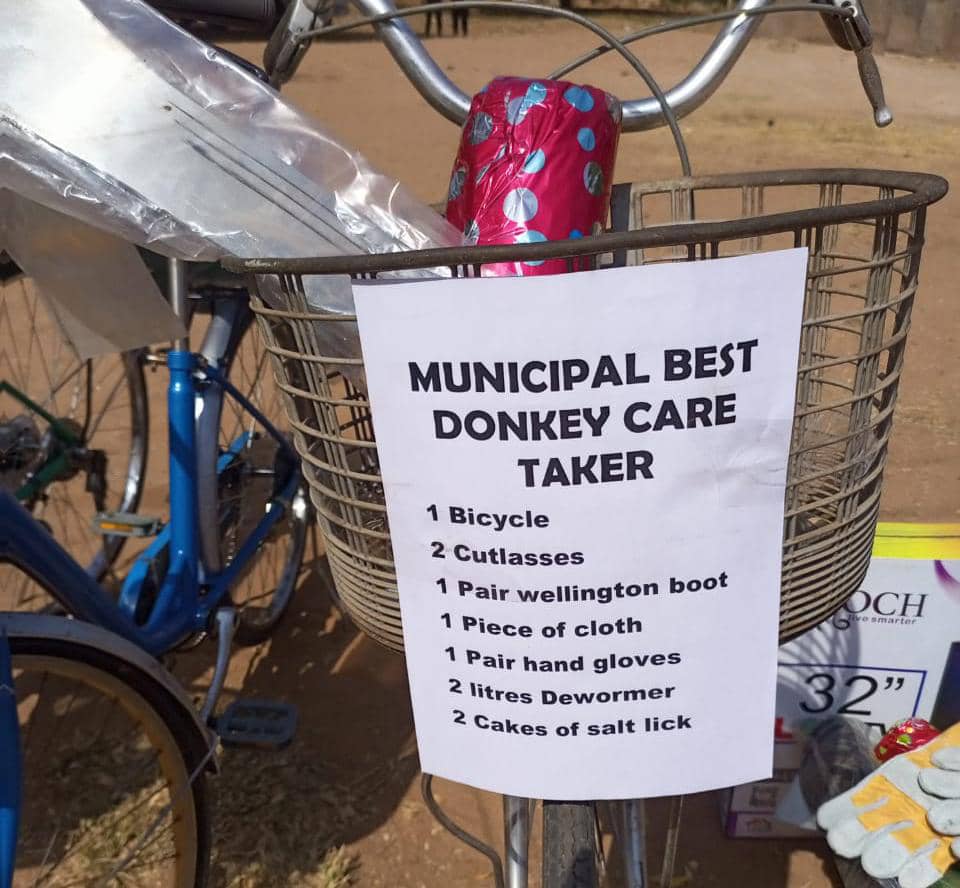 As part of the 38th edition of  national farmers Day celebration in Ghana, four individuals from three municipalities and one district in the Upper East and North East Regions respectively received donkey welfare awards.

The first ever donkey welfare award was introduced and sponsored by Brooke Action for Working Horses and Donkeys, Ghana Poultry Network and Donyaepa in these particular areas this year.

The Brooke Action for Working Horses and Donkeys, Ghana Poultry Network and Donyaepa were able to collaborate with the department of food and agriculture in these municipalities and district after they successfully  implemented a pilot project in Ghana known as “Fight Against Donkey Extinction.”

The aim of the project is to encourage donkey owners to take husbandry and health management for donkeys very seriously after reports emerged that a high number of donkeys are being killed per day not for consumption but for exportation of their skins in many west Africa countries.

The project beneficiary areas are, West Mamprusi Municipality in the North East Region, Bolgatanga, Kassena-Nankana Municipalities and the Bongo District all in the Upper East Region.

Yahaya Saeed Baba, won the donkey welfare in the West Mamprusi Municipality and was awarded with 1 Bicycle, 2 Cutlasses  1 pair of wellington boot, 1 piece of cloth, 1 pair of hand gloves, 2 litres of dewormer and 2 cake of salt lick.

In the Kassena-Nankana Municipality, Samuel Agale won the award and received, a bicycle 1, pair of Wellington boots, 1 cutlass 1 knapsack sprayer to aid his donkey rearing.

In the Bolgatanga municipality Simon Apuko from Kalbeo was also awarded the best donkey welfare and he took home Ghc 1200.00 to construct to help him construct his donkey rearing facility.

Speaking to A1 News David Azure at Nayagnia in the Kassena-Nankana Municipal the donkey welfare winner Mr. Samuel Agale said, called on all donkey owners to desist from killing donkey discriminatory hence the importance of a donkey.

According to Mr. Agale, donkeys are one particular animal that helps both Farmers and non Farmers for transportation of goods among other things. He therefore called on People to stop donkey killing for exportation in order to divert donkey scarcity in the country.

“Donkey rearing is very important because donkeys are such animals that help people in so many ways that people should not even think of killing them. You can use a donkey to plough your farm land. You can use a donkey for transportation of your farm produce or other domestic stuff at your own time. Donkey is one animal that is very wonderful and should be protected because it can do so many things to improve your daily activities”

“I want to advise people who kill donkeys especially for the sale of their skin to foreigners to stop such practice. Because if people don’t stop that attitude time to come we can not even see a single donkey on our land again so please we can kill donkey for consumption but not for exportation of the skill it is very bad and it doesn’t help us people”

All the awards received by the  four individuals were fully sponsored by Brooke Action for Working Horses and Donkeys, Ghana Poultry Network and Donyaepa. The Fight Against Donkey Extinction has been supported by all the association members in their operational areas and the department of food and agriculture.