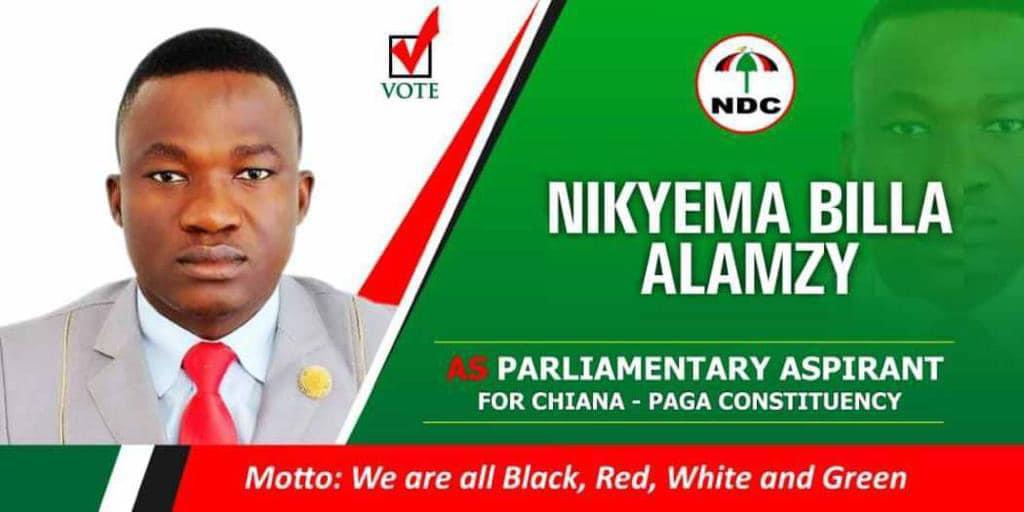 A businessman, Nikyema Billa Alamzy, has declared his intention to contest in the upcoming parliamentary primaries of the National Democratic Congress in the Chiana-Paga constituency of the Upper East Region.

Nikyema Billa Alamzy who disclosed his intentions to A1 Radio, stated that the needs of the people of the Chiana-Paga constituency have not been met since Thomas Adda Dalu was elected MP for the area in the 2020 general election.

“There are a lot of communities in the communities without potable sources of water and as a result, the women, children, and the aged trek for long distances on a daily basis for water. Many schools were ripped off, and that is impacting negatively effective teaching and learning. When we talk about health, some communities on their own, just like Atiyorum, established health centres. However, successive MPs in the constituency including Dalu have failed to contribute the quota to fully complete the construction of CHPS compound for those areas. If I am given the nod, I will work with development partners to provide them with health facilities”

Mr. Alamzy first contested the parliamentary primaries in 2019 but obtained 353 votes. A former District Chief Executive for the area, Thomas Adda Dalu who secured 365 votes was elected the parliamentary candidate of the NDC for Chiana-Paga and subsequently Member of Parliament.

After the fiercely contested primaries, which Mr. Alamzy lost by a margin of 12 votes to the incumbent MP, he has again declared his intention to lead the party towards the general election.

When elected as the parliamentary candidate of the NDC and subsequently MP for the area, Mr. Alamzy said he hopes to provide safe drinking water for all polling stations of the constituency under the ‘One polling station One borehole’ policy, in his first year in parliament.

“Again, I will give a subsidy on borehole drilling for card-bearing members. All that the members need to do is to fuel the drilling rig which I hope to buy for the constituency”, he indicated.

The NDC parliamentary aspirant for the Chiana-Paga said he will opt for development by funding the borehole projects using the luxury car loan for MPs.

Mr. Alamzy said he would also assist the youth and women groups in the constituency with well-structured boreholes for dry-season farming.