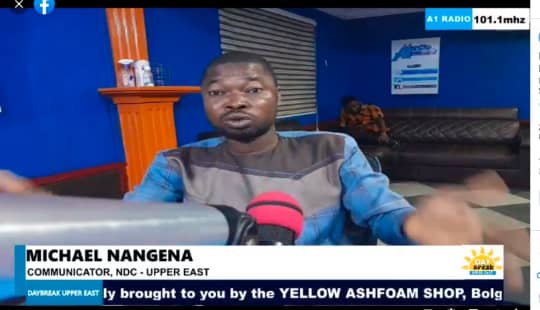 A member of the NDC’s Upper East Regional Communication Team, Michael Nangena has described corruption under the current administration as legendary. According to Mr. Nangena, the President is superintending; serving as the judge and the player in corruption-related matters.

“When it comes to corruption, corruption has become so legendary to the extent that in fact, what is now making it difficult is that, the president himself has actually gone into the ring and most at times he’s the judge and he’s the player.”

He went on to describe corruption in this government as a daily affair; and a government that is “fantastically corrupt.”

Mr. Michael added that independent polls have indicated that the country has lost some billions of cedis to corruption.

“Corruption in this government has become a daily affair. So this government is fantastically corrupt to the extent that most of the independent polls, are telling us that we have lost. Take for instance the Auditor-Generals report; we have lost not less than 33 billion to corruption. CDD poll also projected that from 2017 to 2020 that we’ve close to 9 billion on yearly basis to corruption.”

He described corruption in this government as endemic leading to the loss of money thus making it difficult for the government to pay school feeding caterers, NABCO trainees, Teacher trainee allowances, etc.