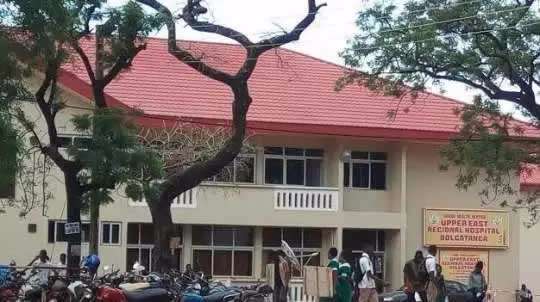 Member of Parliament for Nabdam who doubles as the Deputy Ranking Member on the Health Select Committee, Dr. Mark Kurt Nawaane has explained that the government has not been fair to service providers under the National Health Insurance Scheme.

In lieu of this, service providers have been forced to implement a system dubbed ‘co-payment’. Dr. Nawaane defines the ‘co-payment’ as a system where some selected services which are supposed to be covered by the National Health Insurance Scheme (NHIS) are not. This means that while on paper, the treatment or essential drugs are supposed to be provided for free, patients have to pay.

Other times, patients are forced to ‘top-up’ the payments before they are allowed access to certain drugs and treatments.

This, Dr. Nawaane explained is due to the huge debts and other disadvantages service providers are faced with.

“If you go to our hospitals and you are holding the NHIS card, which has now been linked to the Ghana card, you will still have to do some payments at the hospitals. Everyone who has gone to the hospitals would tell you that what I am telling you is true.”

“It is so because the tariffs which are paid to service providers have practically gone down. It has gone down so much that there is a need for us to review the tariff system. For example, in 2013, the OPD package for which you could do laboratory, x-ray etc, was being charged at around Ghc13.”

Dr. Nawaane explained that the value of the money being paid to the service providers, because of the continuous depreciation of the dollar, makes it difficult for them to fully provide the drugs and treatments stated in the Scheme.

“They have not really sat down to look at the figures and adjust them appropriately such that service providers would not be taking money from patients.”

Overall in the area of health, Dr. Nawaane explained that “I do not know where they are doing well. It is unfortunate that as it stands now, we went through COVID-19, but the amount of money that came in during the COVID-19, was an opportunity to better our infrastructure.”

Earlier, Dr. Nawaane said the governing New Patriotic Party (NPP), led by President Akufo-Addo has failed to improve the health sector. This is because the government has failed to continue with the many infrastructural projects that began under the erstwhile John Mahama administration.

Speaking on the Day Break Upper East Show, the Member of Parliament for Nabdam and the Deputy Ranking Member of the Health Select Committee in Parliament, Dr. Mark Kurt Nawaane explained that if the government, after taking over office, quickly continued in the direction the previous government took, Ghana’s primary infrastructural system would have become better.

Dr. Nawaane was speaking about the progress and direction of the health system in Ghana more than 6 decades after independence.