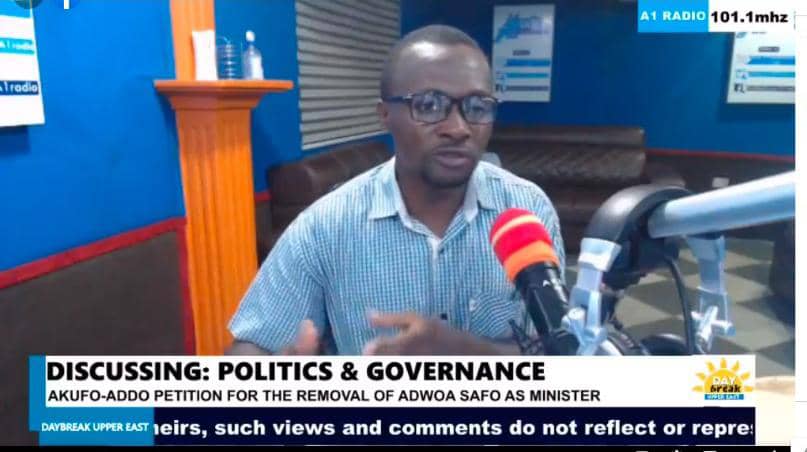 The President is being called upon to take urgent action and bring finality to the issues surrounding the Dome-Kwabenya MP, Sarah Adwoa Sarfo’s role as Minister for Gender, Children and Social Protection.

This is because the current impasse is making it increasingly difficult for party communicators to comment on the issue. Again, instead of communicating the government’s many policies, communicators are forced to take precious time to parry off allegations from the opposition NDC that would seek to take advantage of the situation.

All the while doing this, party communicators at the regional levels are starved of information and as such, are restrained in making viable comments on the issue.

This has become a slight on the governance of the New Patriotic Party led by President Nana Akufo-Addo.

These sentiments were shared by Osman Akariyamah, a member of the NPP’s Upper East Regional Communication Team. He said this when he spoke on A1 Radio’s Day Break Upper East Show.

“I struggle to understand what is going on with regards to this woman’s issue.”

“Mr President, your communicators are suffering. We are suffering to explain some of these things [issues surrounding Adwo Sarfo]. We do not know what is going on . He [the President] should come up with certain pragmatic solutions,” he said.

He said the caretaker minister would not be able to perform as expected because of the extra roles and responsibilities she already has.

“She [Cecelia Dapaah] has to provide policy direction, how would she be able to do that. Not long ago, we have school feeding caterers going on a strike because the payments had not been released and the amount was not enough.”

Earlier, the Director of Legal Affairs of the opposition National Democratic Congress (NDC), Abraham Amaliba faulted President Akufo- Addo for allowing the Member of Parliament for Dome-Kwabenya to still stay in office as the Minister in charge of Gender, Children and Social Protection despite her prolonged stay in the US.