The People National Conversation (PNC) has distanced itself from the two-day ongoing demonstration in Accra organize by a group known as ‘Arise Ghana’.

A press release signed by the General Secretary of the PNC, Janet Asana Nabla and copied to A1NEWS stated that the marchers should rather suggest alternative solutions to the country’s economic problems for public dialogue.

The first day was marred by violence as the demonstrators clashed with the police over route disagreements.

The police fired rubber bullets and tear gas into the crowd as some marchers pelted them with stones and other crude weapons.

But the PNC in a statement said “part of our democratic dispensation street protests such as the one organized by Arise Ghana, must not and should not be allowed. It is a disappointment.”

It said, “certainly, street protests, as a form of demonstration, are becoming outmoded in modern democracies and protesting without providing a solution is equally outmoded.”

“At this material moment, the PNC is calling on fellow Ghanaians, the Arise Ghana group, in particular, to rather demonstrate alternative policies that will aid the current government to ameliorate the current economic difficulty and to criticize the government’s policies via public fora, organizing institutional lectures, peacefully submitting petitions to the appropriate government institutions and making use of our court system to push through demands, amongst other means.”

Below is the full Press statement 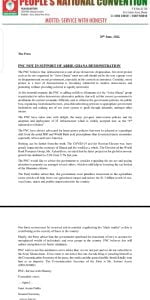