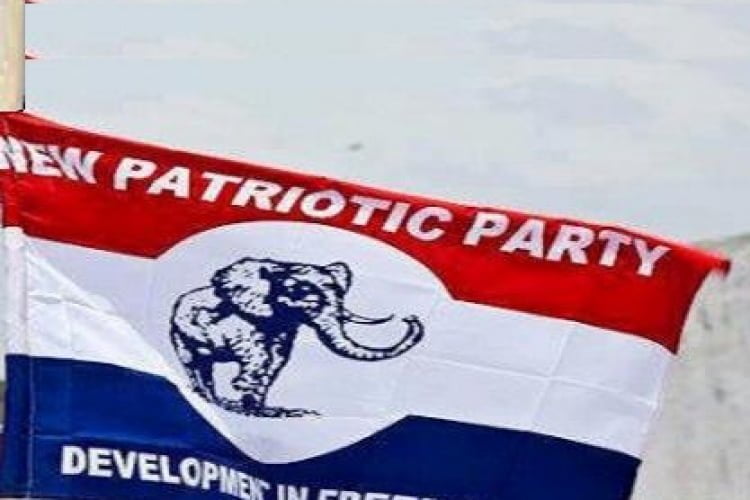 33 communicators for the New Patriotic Party in the Upper East Region have filed a petition to the National Communications Directorate of the Party against the appointment of Peter Ayinbisa as Regional Director of Communications.

The communicators in the petition sighted by a1radioonline.com explained that Peter Ayinbisa’s appointment was in bad faith.

Below is the full petition.

PETITION AGAINST THE UPPER EAST NPP REGIONAL EXECUTIVE COMMITTEE FOR ACTS OF BAD FAITH AND POLITICAL VENDETTA ON THE APPOINTMENT OF THE REGION’S COMMUNICATIONS OFFICER.

2. The Regional Communication Team as you would know has over the years evolved into a horizon of stakeholders to such extent that the appointment of a Communications Director is so dear to both regular sit-in radio panellists, the serial callers and the party as a whole and therefore must be handled with great circumspect and caution especially going into the 2024 elections in a region that is not so friendly to the NPP.

3. It is in the above premise that we find it hard to associate ourselves as Communicators with the recent happenings leading to the appointment of a new Communications Director. The processes were indeed amateurish and undemocratic.

4. Article 7 section 4 a) of the party’s constitution gives the Regional Executive Committee the right to, within fourteen (14) days after their election, appoint qualified persons as Regional Officers who are required to be appointed under section 2 of same Article including the position of the Regional Communication Officer. This, it said must be done based on a broader consultation with the National Executive Committee. However, we had a situation whereby people were appointed without prior application to the tenets of good communication. Ignoring the simple fact of consulting the stakeholders in the Communication Team, many times, ended the Regional Officers appointing persons who do not reside within the capital or never had the time to play that role effectively and most times, this breeds a lot of conflict within the communication wing in the region. Based on these and many others, it became a convention that, the communication officer should be considered within the Communication team as the team is noted to have been working together over the years and will be comfortable working with an appointee from within or at least as courtesy demands inform the communication team of appointing someone, not within the team.

5. After the Regional Officers elections were over, we as a communication team expected that the newly constituted Executive Committee would have out of respect and the spirit of communality invited us to a meeting and tell us their policy direction and interest in the appointment of the Regional Communications Officer. But this was not done.

6. We only woke up to hear the news that the appointments were done in Accra and Hon. Peter Ayinbisa Ayamga, a former Constituency Chairman, a former Parliamentary Candidate, and a former DCE all of the Bongo Constituency, was appointed as the Regional Communication Officer. He recently was a contender in the Regional Organiser position and lost. Shockingly as it was to all and sundry, the information got to the team that the following were the reasons why no communication member was qualified to be appointed:

A6) That the communication team campaigned against the current crop of Regional Officers.

B6) That no one from the communication team is well-resourced enough to go around the various constituencies on their own in respect of party activities.

Regional Executive committee as it was obvious that all Regional Communicators

campaigned against them. D6) Many communication team members were lobbying to be appointed as Director of Communications.

7. We are quite saddled by reasons alluded to above by the Regional Executive Committee. We are clear in our collective reasoning that those excuses are unthinkable and untenable. We think the Regional Executive Committee acted in bad faith by trying to settle personal scores with some team members that they might have issues with in the past. We believe that if even their respective intuitions are grounded on empirical basis, as elected Regional leaders of the party, they represent the general good and not personalized interest and therefore by using their offices to carry out a constitutional mandate to certify their ego, it is an exercise of a conflict of interest situation and therefore must be condemned unequivocally.

8 We still find it hard to wrap our minds around the logic that the Communications Team Members are not well resourced enough to go round the various constituencies as a routine work of monitoring. But the question begging for answer is how long did this become a requirement for appointment as an officer of the party? Have we not constituency communication officers in the various constituencies who work hand-in-hand with the Regional Communications Director? How many of the elected Regional Officers were/or are well resourced enough to be Regional officers?

8. By their actions, we suspect they are planning a palace coup to replace the team members as was alluded to by the newly appointed communication Officer on Radio. Sources closed to us have it that the new Director of Communications intends to advertise on radio to recruit new Communication members. We are still wondering how this is a solution to solving the problem. This action can only be a confirmation that our work over the years even in opposition has not been appreciated enough by the current Executive Committee and the party at large. Thus, the level of disrespect to us as Communicators. If we were respected enough, our views would have meant a lot to the entire process of appointment and we would not have been left out as far as making a choice is concerned. It will interest you to know that a week into public knowledge of the new Communication Officer, no effort has been made thus far to even introduce him to the Communications team. This regrettable incident and shouldn’t be happening at a time such as this. We therefore assume that the new Communications Director is not coming to lead the team but to act in a vacuum. After all, we are not seen as patriots of enough substance as far as the current administration is concerned. We indeed feel alienated and lonely.

9. If this is how the Regional Executive is going to start within their respective positions, we are sorry the NDC is going to have a field day in Communications and consolidating the one parliamentary SEAT in the Region. This is for the simple reason that the future of the party and breaking the 8 is not part of the agenda of the current Executive Committee but rather what is of interest to them is festering intra-party confusion.

10. We are not the least Happy of the appointment of Hon. Peter Ayinbisa Ayamga as our Communications Director and demand of the following as remedy. 11, RECOMMENDATION(S)

All. We demand with immediate effect the withdrawal of Hon. Peter Ayinbisa Ayamga’s appointment as the Regional Communications Director. We are of the firm conviction that his appointment does not reflect the diversity and Regional character of the party.

BII. We demand for a meeting with the Regional Executive Committee as a show of team spirit. We so submit our collective concerns for your unmerited attention as we await your swift

B11. We demand for a meeting with the Regional Executive Committee as a show of team spirit.

C11. As the practice has always been, we demand to be given the opportunity as before to present a candidate of our collective choice for the onward approval of the Regional Executive Committee as Regional Communication Officer.

12. We shall continue with our strike action until the above recommendations are fulfilled.

We so submit our collective concerns for your unmerited attention as we await your swift feedback. Thank you.

God Bless us all! 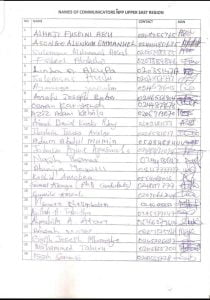 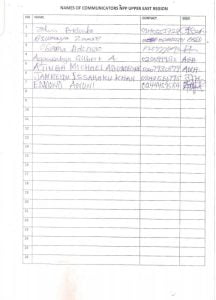