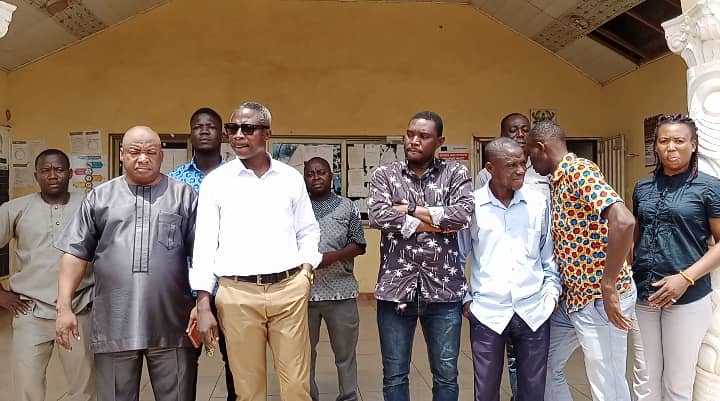 The District Chief Executive of the Builsa South District has noted that the listening President, Nana Addo Dankwa Akufo-Addo will get the Chuchuliga-Fumbisi stretch of road fixed. He said this when he received a petition from disgruntled youth of the area during the Fix the Road demonstration.

On receiving and accepting the petition as the President’s representative, the DCE, Daniel Kwame Gariba first appreciated the organizers of the demonstration for choosing a democratic path which is guaranteed in Ghana’s Constitution.

He said the chosen path was a much-preferred approach to a rather rapturous one that could have led to the destruction of property.

“I want to thank each and every one of you for choosing a democratic path. I think the path that you’ve just taken is guaranteed in our constitution and we prefer this to a very rapturous demonstration where we do not respect the public other act. I can see that you have come this way, and presented the petition to me. As the representative of the president, I want to accept the petition and will duly forward it to his excellency the president, Nana Addo Dankwa Akufo-Addo.”

“It is important and it is instructive for me to make a few corrections. Yes, the road was commissioned or sod was cut in 2016 by his Excellency John Dramani Mahama at Chuchuliga. I wasn’t present but the media carried it and we all saw it. Last week Monday, we had a meeting at Sandema in which the contractor was present and was very clear. He said the sod that John Mahama cut was for the construction of the road from Navrongo, Chuchuliga, Nakong. And that this stretch we are talking off was given to him in the year 2020. And so, I want to make that addition for us to know that it is this listening president Nana Addo Dankwa Akufo-Addo who came and gave this stretch of road for construction.”

Mr. Gariba indicated that he was very positive and very confident the president who listens will get the stretch of road to the road done.

“I am very positive and very confident that the one who has listened to our cry and in his submission. Other governments have been in office before and have failed us. Nana Addo Dankwa Akuffo Addo came and realized that our stretch was not included, he has included it, the works are being done and I can guarantee that this work will be done to satisfy all of us. The listening president that he is, you can count on him to do that.”

The youth of the area protested against what it described as neglect of the road construction by the contractor (MyTurn) and the government which has led to the loss of lives and loss of investor confidence in the area.