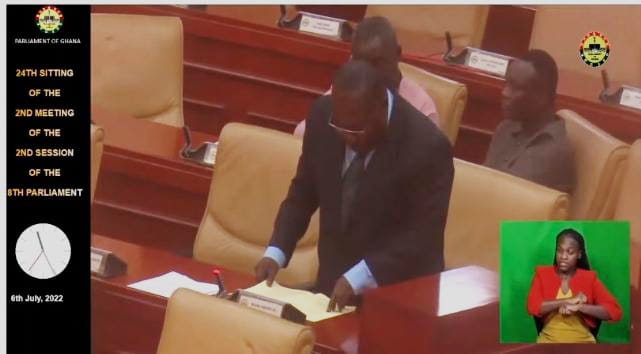 After the completion of an ultramodern police post in Nabdam, the MP Nabdam Constituency, Dr. Mark Kurt Nawaane is making demands for the Nabdam Police Station to be elevated to the status of a District Police Command. This would mean the Nabdam Constituency would not have to fall under the Bolgaganta Divisional Command of the Ghana Police service.

The MP made the appeals on the floor of Parliament on July 6, 2022, to the Minister for the Interior and MP for Nandom, Ambrose Dery. He explained that affording the Nabdam Constituency a District Police Command would help improve the security situation in the area.

“I rise to ask the Minister for the Interior when the Nabdam Police Station would attain the status of a District Police Station,” he said.

The Minister for the Interior, Ambrose Dery, in his response said “in line with the Ghana Police Service’s strategy to maintain law and order, to ensure the maximum security of the population in general, a number of police stations were opened in July 2021. These stations include the Pelungu Police Station within the Nabdam Constituency. Similarly, a number of Police Stations are being established. Notable among them is the Nagode District Police Command in the Nabdam District. to take charge of the Nabdam District. It is expected that the ongoing police restructuring regarding the police in the Upper East Region is accomplished. The Nabdam Police Station will be considered for an elevation to a District Police Station.”

Not satisfied with the initial answer by the Minister for the Interior, the MP for Nabdam, Dr. Nawaane rose again and said, “if the Honourable Minister would remember, I was in his office to ask for permission to build a police station. I built this police station with my own Common Fund with the understanding that if we were able to build this police station, we would attain the district status as soon as practicable. We were usually allocated staff from Bolga. I have done my part. I have walled it [the police station] for them. From your [Minister for the Interior] answer, it still appears vague. When you are going to do it, I do not know. Can I get a timeline for this elevation?”

While acknowledging and commending the effort of the MP for Nabdam, the Interior Minister explained that only 43 percent of the entire area has been converted. He said “to get a district status, it goes beyond the building. We need a certain number of police in the area. Right now, we are training the 5,000 policemen.”

The Minister for the Interior explained that once the training is done, and with the Police’s commitment to elevating the status of the Nabdam Police Station, adequate personnel would be sent to the area to help complete the requirements for elevation.