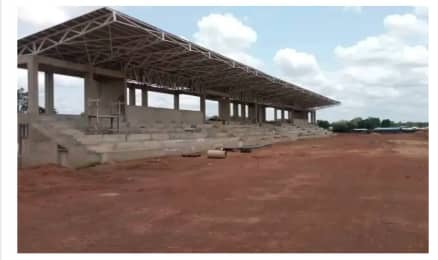 “As I have told you, the problem is between the contractor and the Ministry. They messed up along the line so it looks like they are now looking for the money to go back and complete the stadium. That is the truth of the matter. With this crises, I do not know whether the Finance Minister is prepared to release the funds.”

“Again, the Ministry is insisting that they would give a letter of assurance to the contractor to go look for money to finish the project but when I called the contractor, the contractor said as for that one, he will not do it because they owe him more than Ghc1.5 million. What is the guarantee that if he goes to borrow more money and comes to do the contract, they will pay.”

Mr. Tangombu was hopeful that once the Minister is hauled to Parliament, he would be able to give the true state of the facility in Navrongo.

It would be recalled that the CEO of Kassena Nankana Utd, Cherry Azanlerigo Mboma, speaking on Sports Chat on A1 Radio when asked about the state of the Navrongo Multipurpose stadium said, “the story hasn’t changed, it’s still the same story and more to the point the stadium is still locked up and upon listening to the deputy youth and sports minister on Kessben TV some days ago and per what he said, the completion of the Navrongo Multi-purpose stadium is not coming anytime soon.”