Walewale Catholic Stars were a delight to watch in the MTN FA CUP preliminary stages as they demolished Samba stars in an eight goal thriller at the Mobil Astro Turf Field in Bolgatanga, Friday, 4th November, 2022.

Walewale Catholic Stars rose to a 3 goal lead just into the early stages of the match to the shock of the spectators at the venue and could have scored more if they were clinical.

Samba Stars gave themselves a little bit of hope by pulling 2 goals back before recess.

In the second half, Walewale Catholic Stars continued their fine form as they scored additional 3 goals to shut down the hopes of Samba Stars.

Hosiah Salifu Of Walewale Catholic Stars who scored the second goal for his side was super brilliant on the field of play from the blast of the whistle till the end was adjudged the man of the match. 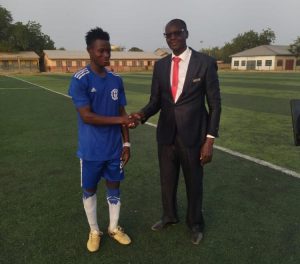 In the other fixture, STK Stars from Tamale shocked their opponent in Sheaga A-Real Town Utd with 2-1 win at the Paga Town Park.

STK Stars rose to a 2-0 lead in the first half and were able to hold them till recess.

In the second half, STK Stars managed to hold their opponents until the die minutes of the game where Sheaga A-Real Town Utd pulled one back but it was not enough for the home side.

Walewale Catholic Stars and STK Stars with their victories have progressed to the round 64 of the MTN FA CUP 2022/2023.