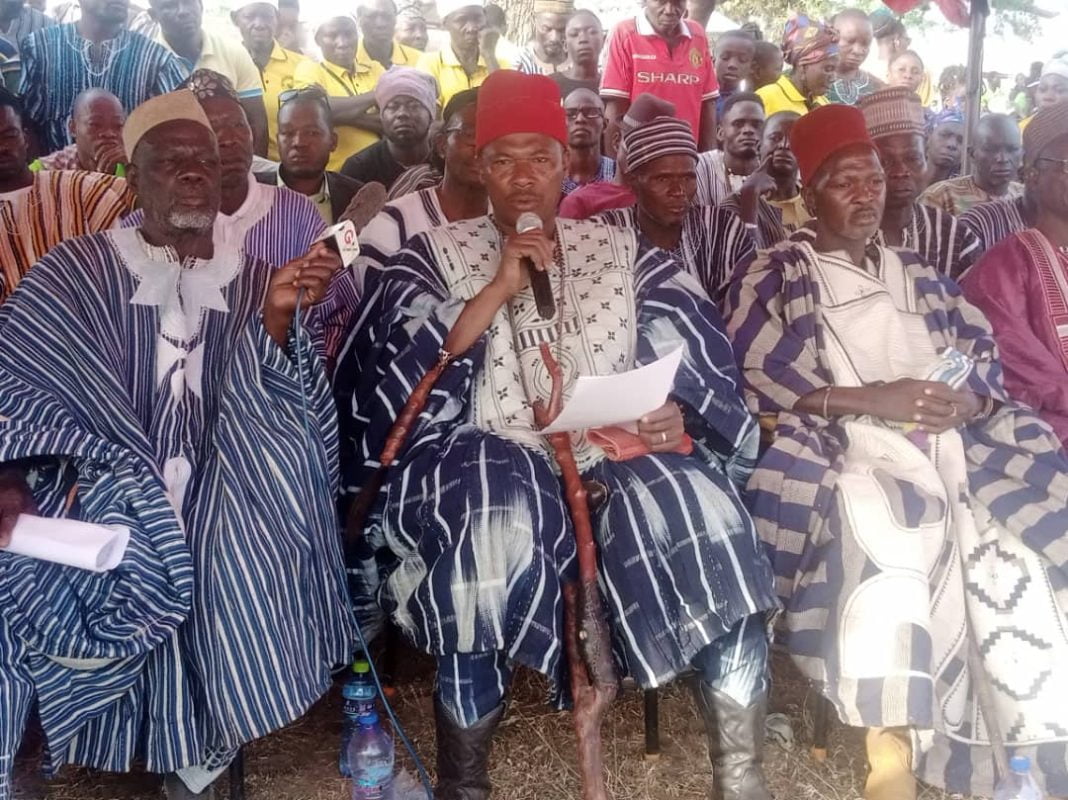 The Paramount Chief of Mirigu in the Kassena-Nankana West District of Upper East Region, Naba Anthony Anonsona Abisa Atasige III has called for peace and unity among indigenes of the traditional area.

Naba Anonsona III  made this call at the Maiden edition of the Mirigu Homecoming Celebration at Mirigu.

The Vice President of the Upper East Regional House of Chiefs said unity and development work hand in hand. The Chief explained that it would excite him to see his traditional area which comprises the Anabaa, Atiiba and Alanga clans who are all sons of Akuninga, coming together with a united front to pursue development.

According to the Paramount Chief of the Mirigu traditional area, peace and unity among Miriba and neighbouring communities such as Lanko, Nabango, and Kandiga are the only ways the needed development can be realised.

“Permit me to remind all citizens of the Mirigu Traditional Area that our strength and peace as a people rests solely on renewed and sincere unity, which are key ingredients for development and growth of the traditional area. My sons and daughters, my emphasis this afternoon, as we gather here, is on unity; unity that will bring the citizens of Lanko, Nabango and Kadiga under one umbrella to sincerely think and act in ways that are productive instead of continuously and unjustifiably suspecting one another in an unhealthy manner.”

“We can scratch the fibre or the surface of our relationship many times but the truth stands that we are one people and it is only oneness that can lead us to accomplish our needs and aspirations. I want to urge the chiefs and the good people of Nabango and Kandiga to join me and the people of Lanko to reclaim our original prestigious and enviable name by living and exhibiting traits of a united people and working to entrench the same at all times.”

Naba Anthony Anonsona Abisa Atasige III, used the opportunity to thank the Kassena-Nankana West District Chief Executive, Gerard Ataogye, for the construction of a police station for the area.

The Chief also called on the Upper East Regional Minister, Stephen Yakubu to help the community to get the needed developmental projects which include, a community centre, fire service station, school bus for the Mirigu Senior High School among others.

The District Chief Executive for the Kassena-Nankana West District, Gerard Ataogye commended the Mirigu Development Association for organising the event which he says will bring families and to re-unite and help foster the needed development and help revive the culture of the area.

On his part, the Upper East Region Minister, Stephen Yakubu while applauding the Chief and the people of the Mirigu for maintaining peace in the area, called on the people of Mirigu to share developmental responsibilities with the government because the government can’t do it alone.