The album which will be launched at Rock Gardens in Bolgatanga in the Upper East Region has 28 songs. 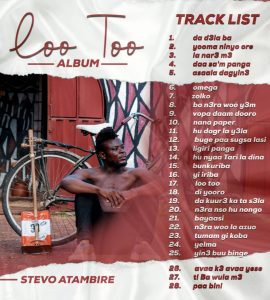 Speaking to A1Radioonline.com, Stevo noted that he mostly draws his inspirations from the happenings in society.

“You know our style of music is not that circular music. So, before I came out with this album, I did a lot of studies about the dos and don’ts of the youth; [and] their behaviours in the society. So, this album ‘Loo Tooho’ which translates as ‘Choose difficulty’ is a message to young people and their choices in life. It is a fact that youth of today hate struggles. So, I want to encourage them through my music.”

Giving further reasons for the album, the “Kologo” legend said it seeks to empower and encourage young people to be perseverant and desist from shortcuts means making wealth.

He said, “Many of our brothers and sisters do not want to preserve in life and usually want to get things on a silver platter. So, releasing this album, I want to encourage them to be perseverant in life.”

Meanwhile, Stevo went on to assure his fans to expect nothing but the best of legendary performance from him.