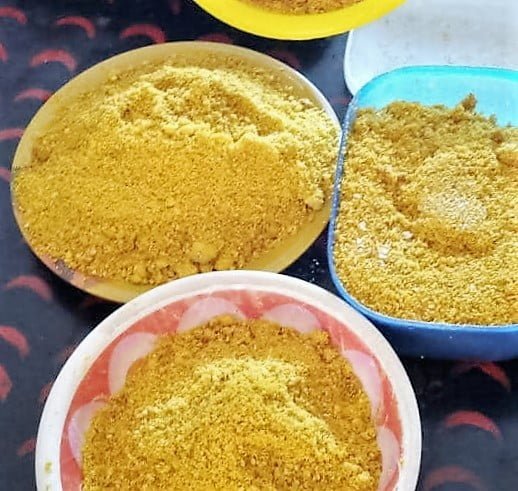 Emerging reports indicated that the over 36 Senior High Schools in the Upper East Region may soon run out of food.

Though most of the school authorities have failed to give the actual picture, school caterers have begun serving students with what they [the students] describe as “Gari Jollof” to manage the situation.

Gari Jollof is a mixture of gari, palm nut oil with some salt and pepper for taste.

On a visit to some of the schools in the regional capital, Bolgatanga, Moses Apiah; a reporter with A1 Radio, some of the students said the ‘gari Jollof’ was a better meal option than the dreaded “Donkey Saliva”. This, according to the students is a mixture of wheat flour, ground paste and other ingredients to form groundnut soup that is served with plain rice.

A student said “the only normal food on this campus is waakye and jollof. Aside from that, nothing that they will cook is of quality here. Plain rice with groundnut soup is like water and rice. We are struggling here. Every week I seek support from my parents for chop money.”

Another student noted that “gari with beans is always like a soil profile as the palm oil will be at the top, followed by water and then the beans. Tell us how this kind of food can help us have a comfortable studying?”

The students also indicated that anytime they want to voice about the kind of food served to them, they often get blocked by either the dining hall prefects or masters of the day.

The students were worried about what the quality of food may mean for their health.

Meanwhile, at the end of the five-day Public Hearing of the Public Accounts Committee (PAC) in Tamale, the Member of Parliament for South Dayi, Rockson-Nelson Dafeamekpor, charged Heads of institutions to feed the students with quality foods and items received from the National Buffer Stock Company.

In the Upper East Region, for instance, six (6) schools were cited in the report for various infractions including Zebilla SHS, Bongo SHS, Zorkor SHS, Bawku SHS, Gowire SHS, Navrongo SHS and as well as St. John Bosco College of Education.