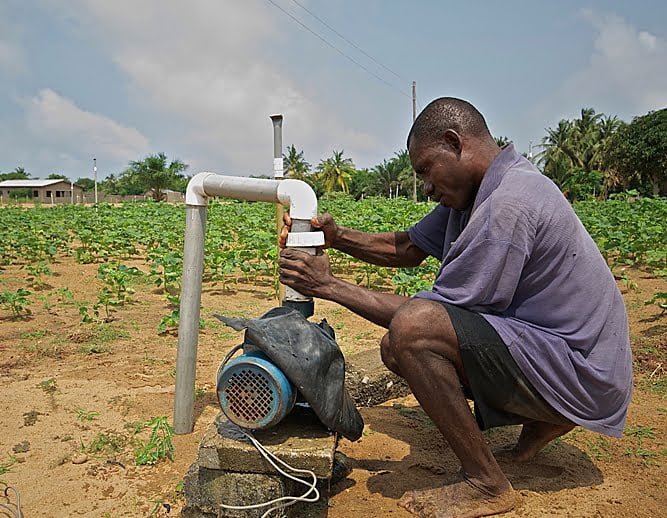 According to the Member of Parliament for the Talensi Constituency, Benson Tongo Baba (BT Baba), more than 200 water pumps have been distributed to farmers across the constituency over the last few years. The water pumps are expected to help farmers invest in dry season farming with relative ease.

Mr. Baba explained that the Talensi Constituency has vast arable lands. Farmers were however constrained and could not continue farming during the dry season. To help arrest the problem and enhance the welfare of farmers and the families they support, the MP procured and donated hundreds of water pumps and distributed same to the farmers.

The MP said the pumps have helped the farmers sustain the work they do. This falls under Mr. Baba’s comprehensive plan to develop agriculture in the Upper East Region.

The lawmaker was however disappointed in the government for failing to make any headway in the area of agriculture.

“We initiated, through the Canadian facility that brought the first tranche of tractors which were made available to the farmers. It was an initiative that was started by the NDC. They [the NPP] came and changed it to Planting for Food and Jobs. We are not opposed to you giving any type of name to it but the implementation is key. Are the farmers benefitting from it? In the whole country, agriculture takes 70 percent of the people and creates jobs for them. If you came out with such a thing, then let us see its implementation in a holistic manner.”

“Under the NDC, we were to have agric mechanisation centres for the districts that are in intensive agriculture,” he said.

Mr. Baba continued to say “Talensi has arable lands for food production. The reason why Talensi plays a unique role in this sector is because of the Volta river, or the water bodies we have across the constituency. There are people who do the rainy season farming and there are people who do the dry season farming. If you focus on supporting agriculture, at least the Talensi district should have an agric mechanisation centre that would promote intensive agriculture.”

“Regrettably, there is none. It is that one that moved me to set up my own agric mechanisation, which is in the constituency supporting. I said if my people would be so interested in this initiative, why not promote dry season farming as well. That led to supplying pumping machines, over 200 of them, and they are doing wonders in the constituency,” he added.

The MP said following his deliberate interest in mechanising agriculture, other private individuals have come on board, to support, in their own ways, the development of agriculture in the area.

He also mentioned that the Constituency benefitted from many road projects under the NDC administration.