It is clear that Ghana’s Agricultural ecosystem has evolved over the years since independence but after six decades, she is still struggling to stabilize the prices of food commodities in the markets. Prices keep surging day-in-day-out with the Peasant Farmers Association of Ghana predicting looming food insecurity if stringent measures are not put in place.

Agricultural experts have blamed the anticipated food insecurity on the government’s reduction of fertilizers under the Planting for Food and Jobs programme. Could Agricultural ecology be the new way of farming?

Meet Joseph Abarike Azumah, Chief Executive Officer of Joseph Abarike Farms and an Agricultural ecologist defying all odds in agriculture in the Bolgatanga East District of the Upper East Region.

Mr. Abarike conceived the idea of going into farming some 12 years ago and not just conventional farming as practised by others. His dream was to go into Agricultural ecology; a practice many would be sceptical about in the Upper East Region considering the rainfall patterns, scarcity of water and the skyrocketing prices of fertilizers.

But nothing could stop a man who, prior to the establishment of over 2.5-acre farm behind his house, believed whatever crop that is found in the southern sector of Ghana can also be adequately cultivated in this part of the country.

He started pursuing his dream through the traditional way of farming and adopting some innovative farm practices by preparing his own organic fertilizer and applying it on the farm. A strategy he says, has increased crop yields over the years. Just like any other startup business, Mr. Abarike did not have it easy as the only community dam he depended on broke down. Getting water for his crops became a big struggle

In an exclusive interview with A1 Radio’s Kennedy Zongbil, he stated that, “in fact my main constrain was water but it reached some point that we were able to solve the water problem. I used to use the community dam but unfortunately, it broke 2 years ago so I have tried using borehole and that is quite good.”

On that note, he believes if the government will realize the aim of its 1 Village 1 Dam policy to help augment dry season farming in the 5 regions of the north, then it should rather concentrate on drilling more deep boreholes instead of spending over Gh. 250,000 on a single dam, he says that amount could drill quite a number of boreholes to satisfy farmers’ water needs.

Mr. Joseph Abarike Azumah has defied the odds and is into crops like maize, groundnuts, and vegetables of different types. You can equally get some palm nuts from his farm for your soup. The same farmland houses three ponds for fish rearing, a piggery, a livestock kraal as well as birds for consumption. 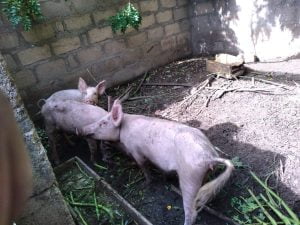 According to him, there is no waste on his farm as everything has its specific use. For instance, if the water in the tree fish ponds is old are needs to be changed, he uses it to water the crops. The excretes of the pigs, (faeces and urine) are combined with leaves of trees and sawdust and left for some time to allow it to decompose and then is been applied to the crops as manure. 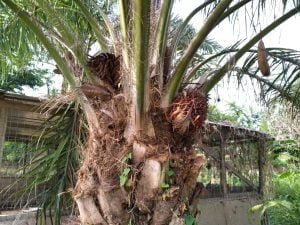 He revealed that “the good thing about it is that, it is integrated and as it is integrated, the by-product of one is used as input for another, for instance, the crops, when I harvest the crops, the residue is fed to pigs, sheep and goats. Once they are confined they give back natural manure to me and I apply it on the crops”. 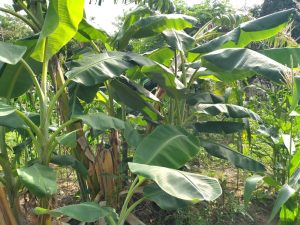 “The aquaculture; the fish as they feed they excrete and some of the feed that are also pushed in decompose, the water from the ponds instead of throwing it away I put it back to the farm again, so the farm generates maize I use part of the maize to feed the fish. So nothing is thrown away, one extra output I use it to feed the other, so it is like recycling sort of thing and this minimizes cost and at the same time I don’t use fertilizer,” he stressed.

He argues that, even though chemical fertilizer gives rapid results, looking at the prices now it will be difficult, if not impossible for farmers to be able to buy fertilizers in the market and therefore government and stakeholders should shift their focus to the use of more organic fertilizer which according to him, is soil-friendly. 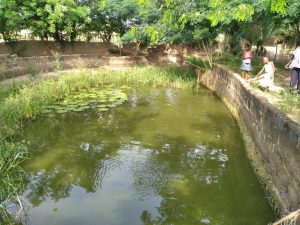 Mr. Abarike, is saddened by the recent food insecurity signs and warnings by various agricultural experts and stakeholders. Notable amongst them is, the Peasant Farmers Association of Ghana who has on several occasions called on the government to put in stringent measures to curtail the looming food insecurity.

According to him, it beats his imagination that, Ghana since independence cannot still feed its citizens and only relies heavily on the importation of almost everything.

Ghana, under normal circumstances, should have been able to farm, feed itself and also export surplus to raise income for national development according to him. But the country has not been able to achieve that goal because of the over-reliance on chemical fertilizers.

“Why should Ghana, with all its plenty resources; both human and land, beg for aid? Why should we go outside to borrow money to buy food? Why should the prices of kenkey be plenty and Ghanaians are crying? Meanwhile, we have a lot of graduates in agriculture” he quizzed.

Ghana’s educational sector has come severe criticisms. Wading into the conversation, the agro-ecology enthusiast, Joseph Abarike Azumah, Chief Executive Officer of Joseph Abarike’s Farms noted that, gone were the days when Agriculture extension used to take students on farms to have a practice of what was been taught in school.

Lately agriculture is only centred on theories and abstracts, which according to him is not bad but should have been complemented with the practicalities of field work.

He stressed if the youth can be motivated to do Agriculture then, it will mean, government has to go back and restructure agriculture education.

“So, unless we change the strategy, we will remain the same. After 65 years of independence, we will continue begging for loans, yes and when the loans come, they come with high-interest rates and we will still be grappling with unemployment problem when we can produce plenty things,” he bemoaned.

Adding that, “schools that used to have agric farms these days have nothing. They just read and write. As for the theory, some of them will just chew and pour and get grades so we need to look at some of these things.”

The Road to Food Security

Ghana is expected to work towards acheiving the Sustainable Development Goal (SDG) two that seeks to end hunger and ensure access by all people, in particular the poor and people in vulnerable situations, including infants to safe, nutritious and sufficient food all year round by 2030. According to him, the government through the Food and Agriculture Minister should concentrate more on pushing more resources into agroecological practices that have the tendency of protecting the deteriorating climate and also increase crops and soil fertility.

Mr. Abarike also believes that, there should be a total reform in agricultural education where students will do 50 percent theory studies and the remaining 50, their lecturers and agriculture extension officers can take them to various ecological farms for them to have a first-hand feel of the how safe farming is been practised.

He also called on citizens of the Region and to a large Ghanaians to, at least, have a backyard garden to help with daily upkeep in this recent time where food prices keep rising.