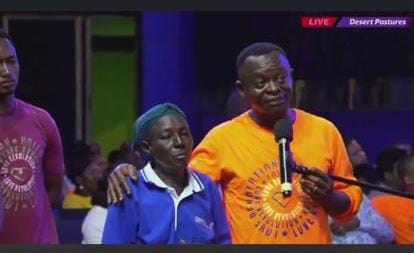 The Holy Bible according to Mark 12:41-44 explains how a poor widow gave all that she had to God.

According to the story, Jesus was sitting with His disciples opposite the place where offerings were put. He watched the crowd as they put money into the treasury. Many rich people threw in large amounts. But a poor widow walked in and put in two very small copper coins – just two mites.

And Jesus called His disciples and said, “Truly I tell you, this poor widow has put more into the treasury than all the others. They all gave out of their wealth; but she, out of her poverty, put in everything—all she had to live on.”

This is what happened on Saturday 3rd September 2022 at the Fountain Gate Chapel-Desert Pastures in Bolgatanga in the Upper East Region.

A woman gave out what she had to support another poor young man that some members of the church had volunteered to support with cash.

While the voluntary contribution was ongoing, a woman walked toward Reverend Eastwood Anaba, the President of the Eastwood Anaba Ministries (EAM). She handed over a note to him in support of the poor young man. The amount the woman gave, according to A1 Radio checks was a Ghc10 note.

Touched by the benevolence of the woman, Rev. Anaba called the woman and requested if benevolent church members could support the poor woman with pieces of cloth to sew. More than 7 church members walked in and picked up the envelopes intending to voluntarily gifted her the piece of cloth.

This incident took place on the 6th day of the evening session of the Love Revolution which started on 29th August and ended on 4th September. The activity was telecast live on Love Revolution TV, the church’s channel, and other social media platforms.

As if that was not enough, Rev. Anaba again requested for the church members to support the woman with some cash so she could sew the piece of cloth when donated.

The church members again gave out their hearts in different amounts. Aside from the different amounts they gave out, a member of the church also promised to support the woman with ghc1,000 every month. Another member gave her $500, another 20 pounds, and three more people also gave $100 each, and the support went on and on.

With tears of joy, the poor woman who was identified as Akelemdita knelt, and thanked God and the church members for coming to her aid to support her at a time many in the country consider a financial crunch.

There are several ways the incident teaches us. First, the poor woman gave probably all the money she had to support another poor young man without expecting anything in return. That is a sign of a cheerfully giver.

Secondly, while other givers giggled and return after offering their support, the poor woman in the live television program walked humbly and handed over her money to Rev. Anaba and walked quietly towards her seat. Maybe she was shy because many of the church members will notice she gave the least. That was a sign of humble gift.

Thirdly, Reverend Anaba noticed hers was a sacrifice because she equally needed similar support. Reverend Anaba could have offered prayers for this poor woman and other needy in the church, but he noticed that some need financial assistance to solve teething problems even though spiritual healing is paramount. That was a show of charity spearheaded of a servant of God.

What happened at the Fountain Gate Chapel-Desert Pastures is worthy of emulation.
We are in a country where some greedy pastors ‘rob’ the church members of their livelihood including the vulnerable with the pretense of helping them.

As the adage goes, ‘givers never lack’, 2 Corinthians 9:6-8 teaches us to give what we decided in our hearts, not reluctantly or under compulsion, for God loves a cheerful giver. “And God is able to bless you abundantly, so that in all things at all times, having all that you need, you will abound in every good work.”