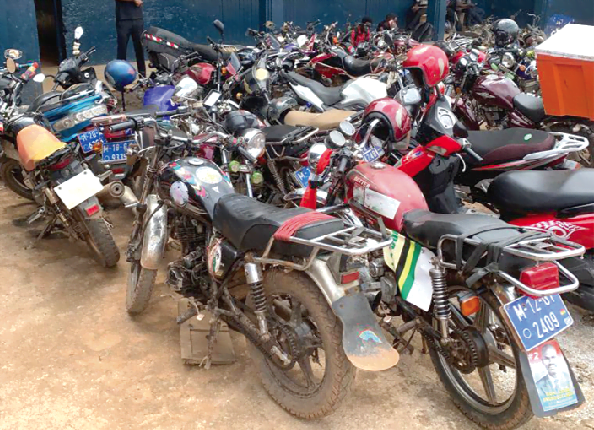 The Kassena Nankana Municipal Security Council (MUSEC) has dealt decisively with the incidence of motorbike thefts within the central business district of the Municipality; Navrongo.

The decisive move has led to a complete reduction of motorbike thefts in the area.

This assertion was made by Joseph Adongo, the MCE for the Kassena Nankana Municipality on A1 Radio’s Day Break Upper East Show.

“In December 2021 and January 2022, as MUSEC we met, we increased the patrols. We also the police motorbikes. Individuals have also bought motors for the police and they are doing patrols. The security situation has improved but we need to work more. That I agree”.

“I cannot remember when there was a motorbike theft; maybe I have not heard. The last time I heard of a motorbike being snatched in the Municipality, I do not remember. When it was rampant, every day, you would hear of it. The situation now has come down. We will still be doing more. We now have a lot of barriers. We also have a patrol team that is always on the move,” he said.

Meanwhile, Mr Adongo, the MCE for the Kassena Nankana Municipality (KNM) has admitted that the ongoing Multipurpose Youth and Sports Centre of Excellence in Navrongo; the capital of the KNM has been unduly delayed.

Mr Adongo said while the first phase of the project has been finished, it is difficult to say what the scope of the next stage is, and when it would be finished.

Mr Adongo said this in response to the MP for Navrongo Central, Sampson Tangombu Chiragia’s claim that the project has been taken over by pigs in the area. Both the MCE and the MP were speaking in different interviews on the same platform; the Day Break Upper East Show on A1 Radio.