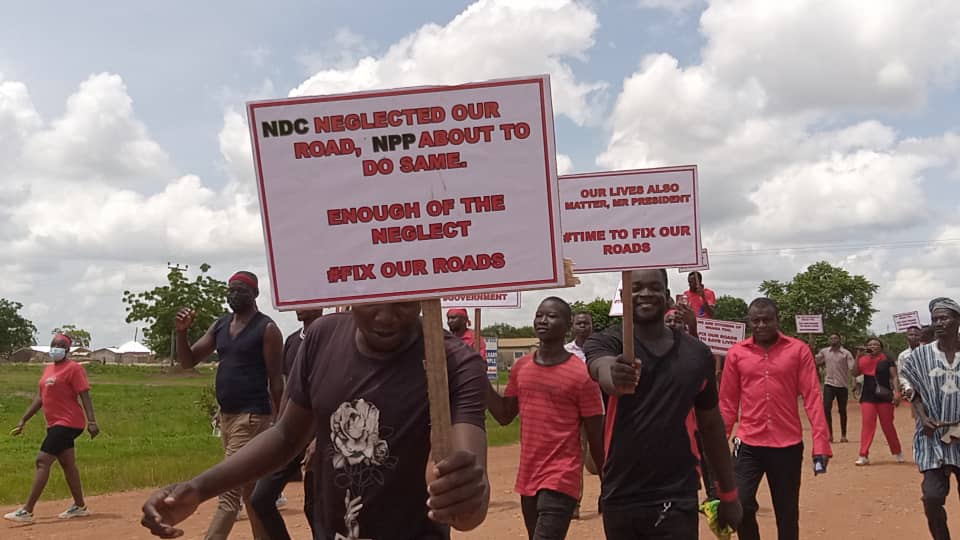 Scores of young individuals from and or resident within the Builsa South and Builsa North Districts of the Upper East Region Thursday, July 7, 2022, took to the principal streets of the area, wearing black and red attires to express their disappointment in the government for failing to work on the roads in the area even after months of oral commitment.

The Lead Convener of the group, John Apaabey speaking on A1 Radio’s Day Break Upper East Show explained that over the course of the last few months, some 8 persons had lost their lives due to the bad nature of the roads within the Fumbisi area; a situation that is undesirable.

As such, to compel the government and the contractor; MyTurn, to quickly fix the roads, the youth, poured onto the streets in their numbers, holding placards with inscriptions such as “Enough of the deaths due to your negligence. #MYTURN”, “We are citizens of Ghana too. Fix our roads. #GOVERNMENT”, “NDC neglected our roads, NPP about to do same.Enough of the neglect, fix our roads” and “Our lives also matter, Mr President, fix our roads” amongst others.

Speaking on A1 Radio, just moments before the youth took to the streets, Mr. Apaabey said, “we have, in the past, made several appeals through our chiefs at the slightest opportunity we get to make this appeal. In 2019, the president himself was in Builsa South and said the next time he will be in Builsa South, he was going to ride through a well-tarred road. In 2020, we felt that COVID-19 had caught up with everybody and things were difficult. In 2021, we thought things were getting better. In 2022, nothing is still being done about it.”

“The contractor, though he is on the road with his machines parked and in some communities, you will find one or two people doing culverts, other than that, nothing major is being done on the road.”

“Our concern is that the road construction is being delayed. The contract, when John Mahama cut the sod for it in 2016 was going to be completed in 2019. 3 years after the supposed contract completion, the road hasn’t still been put in good shape.”

Mr. Apaabey stressed that the people of the Buluk area have been abandoned and left to their fate. He called on the government to, as a matter of urgency, fix the roads to help avoid needless deaths in the area.