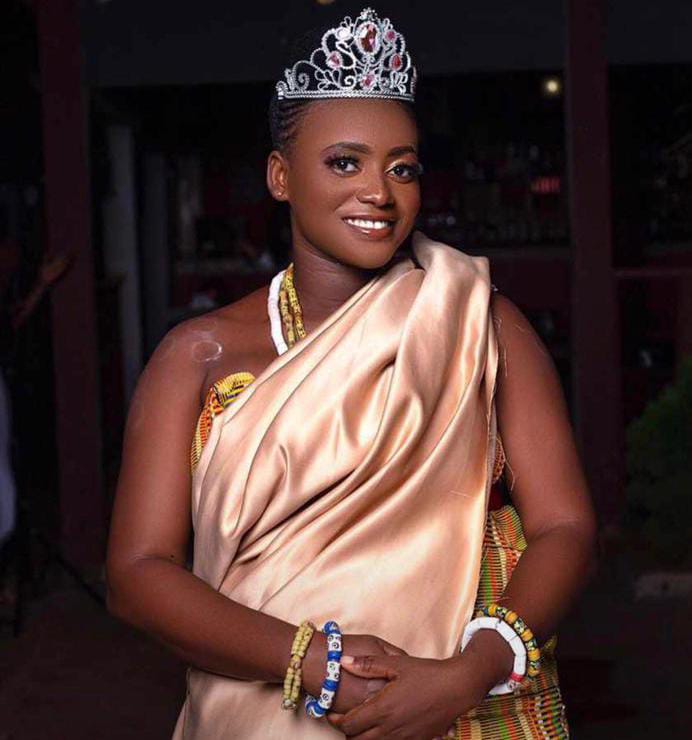 Pernarh Mavis Kabukie, a level 200 student of the Department of Media and Communication Studies, produced a thrilling performance clinch three awards at the just ended ‘Face of TaTU’ on Friday night.

‘Face of TaTU is a beauty pageant organized annually by the Students’ Representative Council (SRC) of Tamale Technical University (TaTU). The pageant seeks to afford young ladies in the University the platform to bring their talents to the limelight. It also serves as an enormous opportunity for contestants to showcase their intellectual prowess to the public.

Ms. Kabukie whose performance put the auditorium to a rapturous mood won the social media personality, Ms. Photogenic as well as the first runner up awards on the night.

In the talent show segment of the pageant, she succeeded in moving the audience through the use of brass band music.

In an exclusive interview with A1 Radio’s Elijah Beyeni on Sunday, Ms. Kabukie, who is also the incoming Finance Officer of the Media and Communication Studies’ department expressed her satisfaction and happiness over her achievement.

She said her stellar performance that night was attributable to her experience in pageantry and the immense motivation she had from her departmental head, friends as well as loved ones.

“I felt like I have been on those platforms before and this one wouldn’t be anything and I felt like if I put up my best, I did it for all. My friends my Head of Department, the whole school was in support of what was doing. So I felt motivated and like let me just come out with my best for everyone to be happy. It is an entertaining moment though and a learning process,” she said.

She went on to express her sincere gratitude to his family, friends, department and all the people who in various ways supported her to put up such a performance.

“So I just thank everyone who supported me a lot, who encouraged me to bring out the best performance that night,” she added.

When asked about how she felt upon realising she succeeded in moving the crowd through brass band music, she stated that she was full of joy at the time.

Ms. Kabukie noted that her insatiable love for music and her priority to see other people entertained influenced her to entertain the audience through the use of the brass band.

On what plans she has for the future after winning this award, Ms. Kabukie said she has a vision of contesting for Ghana’s Most Beautiful (GMB) after school and did not rule out the possibility of contesting for Face of TaTU next year.

She concluded by advising her fellow ladies to be as courageous as possible as there is no limitation to what a woman can achieve. She added that it is about time women paid death ears to persons who brand tenacious women as too knowing and chase their dreams.

Pernarh Mavis Kabukie went home with a refrigerator and an amount of five hundred Ghana cedis.

Meanwhile, Abaabagre Flavia was crowned the overall queen of the contest.

The pageant was fiercely contested by a total of eight ladies within the University.