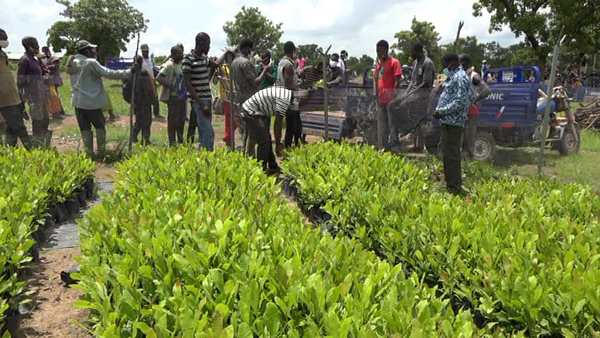 Some 30,000 cashew seedlings have been distributed to farmers in the Tempane District of the Upper East Region. With support from the District Assembly, 10,000 seedlings of mango were also distributed.

The distribution of the seedlings falls under the government’s Planting for Export and Rural Development (PERD) programme.

There is a 55 percent survival rate for the seedlings planted. This is according to the Tempane District Director of Agriculture, Ibrahim Jamaldeen.

The unavailability of water is one of the challenges affecting the steady growth of the seedlings planted.

Mr. Jamaldeen continued to say, “animal invasion is one of our biggest challenges. There is also bushfires to an extent.”

Meanwhile, the Bolgatanga Municipal Chief Executive, Rex Asanga has commenced investigations into the 35 percent survival rate of cashew seedlings planted by some farmers under the government’s program Planting for Export and Rural Development (PERD).

The Planting for Export and Rural Development (PERD) is a government Programme to promote rural economic growth and improve the household incomes of rural farmers through the provision of certified improved seedlings, extension services, business support, and regulatory mechanisms.

Seven thousand cashew seedlings were distributed to some farmers in the Bolgatanga municipality in 2021, but only 35 percent of the seedlings survived.